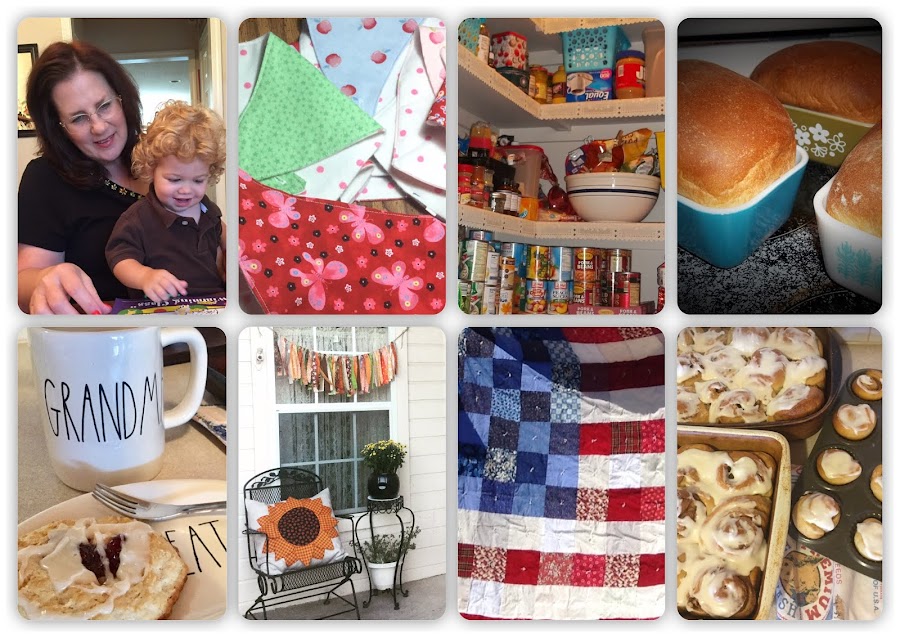 Fruit for the week and a new kitchen

We like fruit.
Jeff takes 2 servings of fruit in his lunch box everyday.
The grandchildren like fruit at every meal too.   No cooking is involved in serving fruit but all that peeling and chopping  does take time and gets your hands messy.
I like to buy fruit in bulk, usually at Sams,  and because of the mess, I like to prepare it in bulk too.

Monday morning,  I cut up one fresh pineapple,  peeled about 10 clementines and sectioned about 10 ruby red grapefruit.
Then some of it got put into serving size containers for Jeff's lunch box.
The rest is in 3 containers in the fridge,  making for quick and easy fruit servings for me and the grandchildren.


Isn't this a cute play kitchen?
My son in law got it from a coworker whose children had outgrown it.
And they got it from as a hand-me-down from another family.
It is Step2 brand and in really good shape to be several years old.

Thrifty tip - pass things on that you no longer need and then  happily accept when other things are passed on to you.

One of my very favorite things about getting something second-hand - no packaging and no giant box to deal with!

Posted by Rhonda at 8:12 PM 8 comments: Links to this post 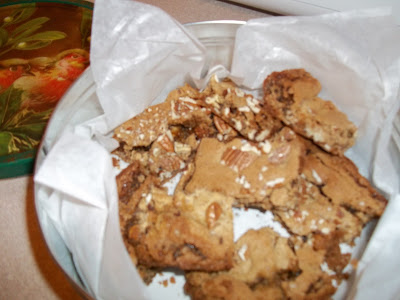 How does a simple, low cost, low calorie dessert sound?

I read about this butter and oil free bar cookie recipe on Sunny Simple Life, she read about it on the Cozy Little Kitchen  and she says the recipe is from an older Paula Deen cookbook.
I was not expecting this recipe to be good but it really is!  It got thumbs up from the 6 family members that ate them - the only complaint is it makes a small recipe so they ran out pretty fast.


Stir together flour, soda and salt in a smaller bowl.
Stir flour mixture into egg mixture.
Add most of the nuts.
Spread in pan and sprinkle on the rest of the nuts.
Bake for 18-20 minutes.
The batter will puff up and get golden around the edges, but stay very moist inside.
Let cool, then cut into bars or squares.
You can sprinkle the top with powdered sugar but I left ours plain- they tasted delicious plain.

I will be making these again and again!

I know nuts are expensive but we get usually have pecans from my parents,  I buy walnuts and almonds at Sams so this is not an expensive recipe for me anyway.

My birthday is in December and my parents gave me some cash.

I have looked at several Cath Kidston catalogs, liked most everything in them, but mostly liked their handbags.  After Christmas,  they had a sale I could not resist- the bags I wanted were about 50% off -
so I happily ordered 2 with my birthday money. 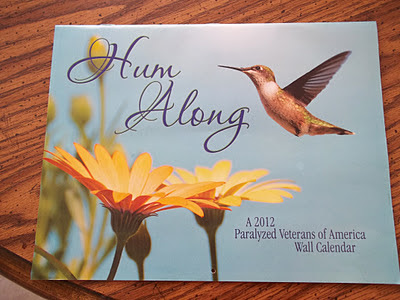 this is the cover of the 2012 calendar we got from the Paralyzed Veterans of America.
I just love  "hum along"  so much,
it may be my new motto.

Posted by Rhonda at 7:10 PM 5 comments: Links to this post

Doesn't everyone want to spend less and have more time?
I have been very frustrated with the huge amounts of money and time I have spent just shopping for groceries.  In the past,  I mostly shopped at the stores in our town, and tried to stock up on the sale items.  It just seemed to require so many trips,  things would be out of stock,  all the time checking ads and then the actual shopping.  I know lots of people do very well with this method.  But it was not really working for me,  and instead of getting bargains and keeping stocked up  - I just spending too much time shopping.

1.  We did one big shopping trip to Sams,  Aldi and Crest (a discount grocer in OKCity)  and tried to buy about a month's worth of groceries.
We went  Dec. 27, almost 3 weeks ago and I have not bought anything else since then
(except one bag of frozen cherries for a pie)
I have not been to Walmart or Walgreens or done any shopping at all,
except for a quick stop after Theo's vet appt. to get the cherries and one trip to  a  thrift store while I had time to spare between 2 events.
I would like to average $100  a week for groceries but that is probably too low.  However we spent a little less than $300 on that big trip and still have a lot of it.  It is too soon to know if this method will average out to that low or not though.
2.  I gave up drinking soda.  Big money saver as well as time shopping
3.  buying extra milk and freezing it
4. buying produce that will last a long time - we are out of grapes and bananas,  but we still have plenty of apples, grapefruit, oranges, clementines and canned fruit.
For produce,  the produce from Sams is so fresh, it really will  keep for a month.  I wash it and then package it (well dried) in Tupperware or zipper bags.
5.  Making all our bread

the last one has been very easy too.

My parents gave us money for Christmas and we used it to buy  a  large Zojirushi bread maker.
It makes the nicest bread too. 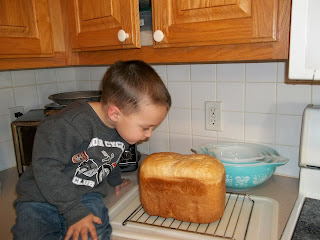 can you tell from the picture how big that loaf is?
It is big!
Gavin thinks it smells really good! 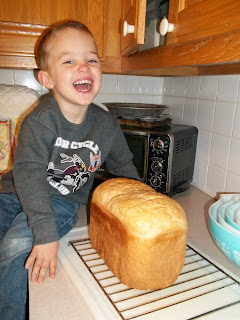 We have a Zojirushi rice cooker that we bought in 1990- it still works great.
After reading several blog reviews for the Zojirushi bread machine,  I felt very confident choosing it even though it is more expensive than other makers.

The bread is delicious!  I've baked 6 loaves and every one has been perfect.
Also,  this bread stays softer and moister, even days later, than my normal homemade bread.

Thank you Mom and Dad,  I promise you will love this bread too!

I like spending less money but I am thinking the saving time is equally or even more valuable right now. 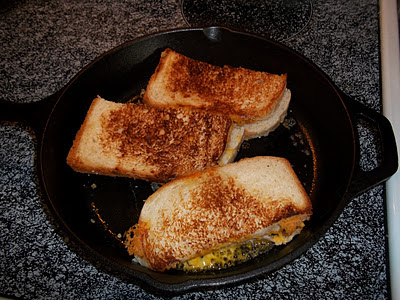 I chatted with another blogger,  Belle at The Bon Bon Club, about cast iron.  She showed some before and after pictures of cast iron that really needed TLC.  They looked amazing after she cleaned and seasoned them.
It reminded me that I have several pieces of cast iron but almost never use them.  I do a lot of cooking in big non-stick skillets that need replaced about every year or so - not a thrifty thing at all.
Anyway,  she encouraged me to use them.

So,  I thought what have I got to lose?  I opened the drawer under the stove and found more cast iron pieces than I remembered.  I knew I had 2 cornbread stick pans and 2 skillets,  actually I have 3 skillets!

I got out one of them  and was pleased to see it was seasoned a lot better than I remembered.  I've cooked in it 2 days in row now and plan to keep working with it.

So,  do you have cast iron?
What do you cook in yours and what do you not cook in it?
This old dog wants to learn some new tricks.
Posted by Rhonda at 8:51 PM 13 comments: Links to this post

Terri used to write Penny Ann Poundwise and In the Blue House on the Hill.
She has a new blog address and I just wanted to pass it on in case any of you might be looking for her. 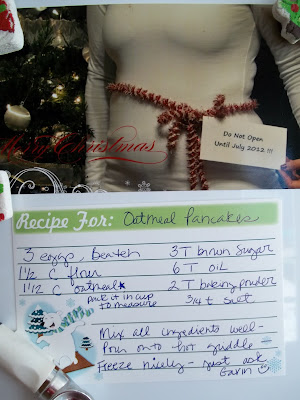 I have not heard from anyone who tried to make this recipe.
I noticed a problem before I gave the recipe card to my DIL.
This recipe also calls for 2 1/4 cup milk.
I added it to this card and hope you will too if you try to make them.
They really are good pancakes!

I am so sorry if anyone wasted your time and ingredients because of my goof.

who does this messy kitchen belong to? 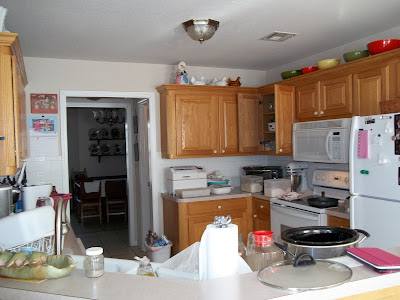 who does this messy kitchen belong to?  That can't be Rhonda's kitchen, can it?
Well, yes it was my kitchen this morning. 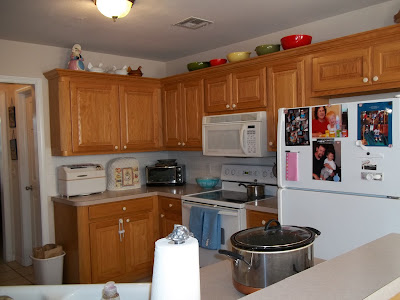 I was slow getting around this morning but then I got busy in that messy kitchen.
All the dishes got washed and put away.
Supper is cooking in the crockpot -smothered pork chops.
Potatoes are peeled and waiting in a saucepan to cook for supper.
Every surface got wiped off including all the appliances and counter tops.
The floor was swept and mopped
The big pantry needed some organizing and got it
Trash taken out 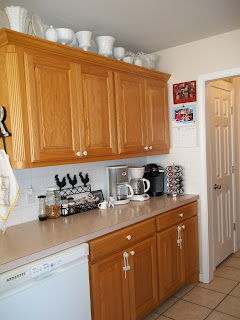 awwww
it makes me smile just seeing my kitchen clean and organized again.

an announcement and a frugal recipe

This is a photo of some things on my fridge.

One is the Christmas card from my stepson Clint and his wife Amanda.  The picture is her torso by their Christmas tree.  If you click on the picture,  you can read the message better.
The other is a recipe Amanda asked for months ago and I just got around to writing it out for her.

This baby will be a sibling for Gavin.

Our son Bobby and Sheena will also be having a baby
due the end of March. 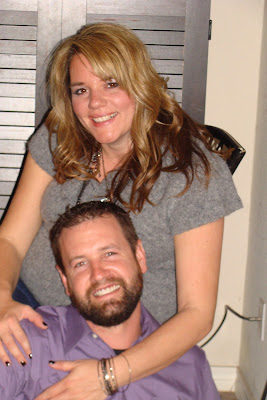 We will have 4 grandbabies come next Christmas,
won't that be fun!!!!


I am participating in the saving money in 2012 challenge over at Frugal Makes Cents and will have some posts about it soon.
Go on over and visit if this is a subject you are interested in.

I should be back posting soon, just resting up as 2011 wound down and 2012 gets started.
Posted by Rhonda at 9:46 PM 6 comments: Links to this post