How I make pizza crusts for the freezer

This will make 2 big 16 inch crusts or 4 smaller crusts, about 12 inches each.

I make this in a bread machine but I am sure it would be great done by hand or in mixer.
Posted by Rhonda at 8:38 PM 6 comments:


The posts I've done about Roku  have got more hits than anything else on this blog,  I think mostly from potential Roku buyers doing Google searches.  Several commenters have asked what channels are on Roku.
Well, there were hundreds, maybe thousands.
This video is long, about 10 minutes,  so I suggest you only spend time watching it if you are really interested in Roku.

I show some of the channels in this video but there are way too many to even start to show them all.

Questions?  just ask and I will try to answer.

To go with Sunday lunch,  I baked cornbread muffins in some miniature muffin pans that have been gathering dust in the cookie sheet drawers.
The tiny cornbreads were so popular,  I used those mini-muffin pans again today 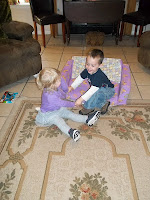 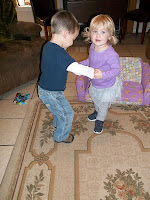 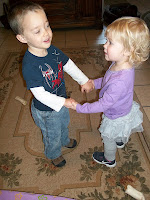 G and E had fun playing ring around a rosie this morning,  you can see in the last photo that they really like the  all fall down part. 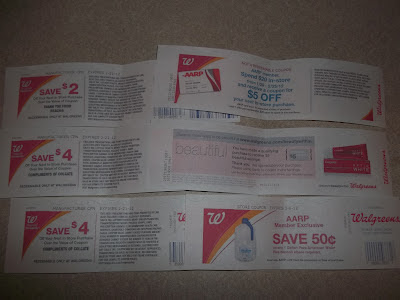 Frugal tip - if you shop at Walgreens and have an AARP membership - always hand your AARP to the cashier to scan when you check out.  The coupon machine will spit out some extra coupons for you,  usually one like $3 of your next $10 purchase of Walgreens items or $5 off your next $20 purchase as well as some discounts on other products.

The $2, and 2 $4 register rewards were from buying toothbrushes a few weeks ago.  I was expecting 2 of them but the 3rd one was a surprise.  I don't know if the AARP card triggered it or not.

I am not a dues-paying member of AARP,  I read about a sign up for a free membership a few months ago and got my membership card for free.
Posted by Rhonda at 7:21 PM 3 comments:

(almost) Once a month grocery shopping

Doing a "big shop" once a month is still working for us.  It is a lot of work to make a long list, checking it twice,  then driving to Sams and maybe Aldis and Crest.  Putting away all the purchases is tricky too,  good thing I like to work puzzles!
It is just really a big time saver all the rest of the month to not have to go shopping.
We bought lots of oranges, clementines and grapefruit - they keep well.
Can you see the bottom right drawer is full of romaine lettuce?  Each head is wrapped air tight in a plastic bag and should keep all month.  The grapes, strawberries and spring greens will be used first.
Onions and potatoes are stored in crocks on the pantry floor.  I've been keeping the door shut on the pantry so it stays cooler in there and the root veggies have been keeping very well.

I still watch the local sales and have bought a few things.  One store had Pace salsa on sale for 99 cents for the Super Bowl and I got 24 jars.  That same store had butter for $1.99 a pound and I got 6 to put in the freezer.
I've also bought a few things at Walgreens but mostly I have stayed out of the stores.  I can't say I am really spending a lot less shopping this way but I am spending less time.

we heat our home with natural gas and that bill is from a different companyI think I have heard at least a dozen times, from "energy experts" that automatic dishwashers cost less to use than old fashioned handwashing.   I have about decided that those experts must be paid off by the dishwasher and dishwasher detergent makers!  Several years ago,  I did an experiment with my bill, trying to lower it and hand washed all dishes for a month.  My utility bill was lower that month,  you can read about it on my old blogA Home With A Smile I had pretty much forgot that until I got this last utility bill.  I was wondering why it was so much lower,  then I remember I had not been using the dishwasher because it was not working correctly even before it flooded my kitchen.  And have you priced dishwasher detergent lately?  None of them are cheap.Liquid hand dishwashing soap costs a lot less than the automatic stuff too.  So,  if you are really trying to lower your utility bills and grocery store bills,  you might want to switch to handwashing.  As I type this,  my dishwasher is running- cleaning all the breakfast and lunch dishes-I am not giving it up right now but I certainly could if needed.

Years ago, maybe around 1994,  we started making and filling Valentine boxes at home.
Bobby, Jimmy and Nina were all at home for homeschooling for 2 years ( they started school at public schools and graduated from public school but need some intense instruction in weak subjects so we homeschooled them.)

Anyway,  we stayed really busy and they did not miss much about public school but they did miss the school parties.
So that first year of homeschool,  and most years since,  we have made and filled boxes for Valentines.

Not every family member participated this year but those of us who did last night had a great time. 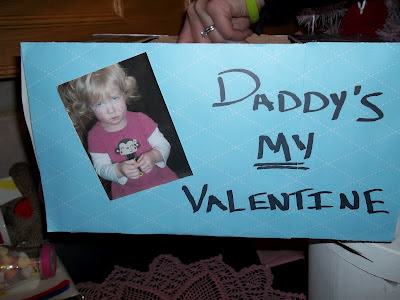 Valentine Decorating - use what you have

It's time to put out the Valentine decorations and since I don't like to shop,  I used what I had -

a small tub of Valentine decorations from years past,
a Christmas tree
lots of crocheted treasures from my Mom
a Christmas wreath
and a cute little boy

Do you have Valentine decorations in your home?
Please tell me in a comment , I would love to come to take a look.

Good morning everyone!
My dishwasher has not been consistently cleaning the dishes all the way for a few months and I had just about quit using it.
But last Sunday afternoon,  we had a lot of dirty dishes and I was tired so I loaded up the dishwasher, then  I sat down in the living room with my son and husband.  A little while later,  I went in the kitchen for a drink and saw that the kitchen floor was covered with water that was coming out of the dishwasher.
Thankfully my son helped dry up the water and my husband got the water shut off.

The appliance repairman came Monday morning, ordered a part and then replaced in on Weds morning - pretty fast service!
Anyway,  the water inlet valve was ruined as it was just full of alum that is in our water and it had corroded the fittings too.  That  part was so clogged, it was not letting enough water in the dishwasher
After the repairman fixed the broken part,  I asked him about the not-clean-enough dishes.

He told me several things to do and now,  I can happily report that the dishwasher is working right and yields very clean dishes!

Another tip from the appliance repairman - he said any dishwasher or washing machine,  no matter the age or brand, could malfunction and flood your house during a cycle.  He said they should never be left running attended - either when we leave the house or go to bed.  I am taking his advice on this one.
Posted by Rhonda at 9:50 AM 13 comments: