Finances on Friday - a day late

Join the link up with Rebecca for Finances on Friday


We were Netflix members years ago and they sent me an email today, offering us another a free month. they are hoping we will re subscribe, and we might, but I doubt it as we have Amazon Prime. I looked around the Netflix site and am happy to see they have Call the Midwife, multiple seasons. I've never seen am episode, just a few clips, and I to watch it now.   We will see how much we enjoy this free month.

I cashed in my Swagbucks points for another $25 in paypal.

I went to Walmart today to exchange some jeans for my husband and while I was there I made one other purchase- price matching red grapes for 99 cents a pound. I got 2 bags for $4 instead of the $11 they would of been.

All the rest of our grocery shopping has been done at Aldi. We've eaten only home cooked or home prepared meals.

I needed milk, mostly for my grandchildren. I bought a gallon as it is cheapest per ounce that way. But some of the grands will be here less this summer while their parents are off work for summer so I poured some of the milk into a glass pitcher and put it in the fridge. I put the rest into 2 other plastic jugs and froze them for later.

Our family membership to the wonderful children's museum, just a few miles from our home, expired so I renewed it but got a smaller one. Last years was for up to 6 family members but I went down to just 4 and spent $100 less. My grands all enjoy playing and learning at this museum and I like that it is so close, very clean and safe and climate controlled. 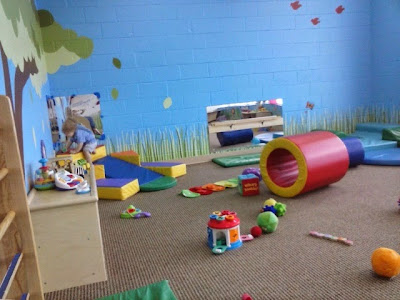 The toddler room at the museum 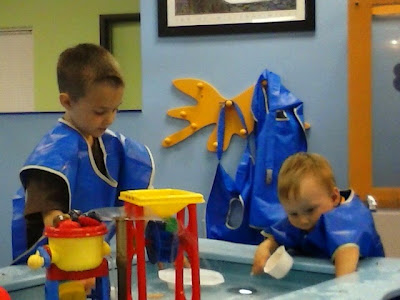 The water table - always a favorite and somehow my grandsons still get wet even wearing the vinyl aprons :) 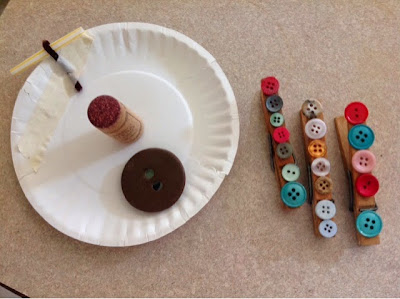 
Happy Memorial Day everyone - I am thankful for all our Veterans and active duty service members. I just wish the government did a better job fulfilling medical care for them. That's another post though..... 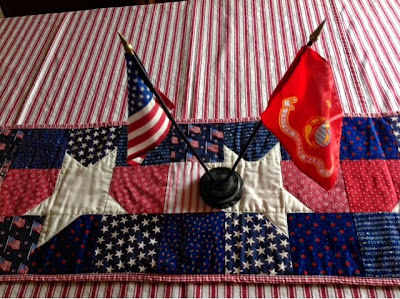 Greatly Blessed is a sweet blog with lots of  predict reviews, coupons and giveaways.  This link is  for a Contest I won there for this great Argan oil.
I had never heard of Argan oil but my daughter has been using a few healing oils so I was really interested in this one.  When this oil arrived, I offered it to her and I thought she was going to take it but she didn't so I started using it, mostly on my hands and cuticles, sometimes on my feet.
My hands get very dry with all the cleaning and washing I do.
After using this Argan oil for just a few days, my hands were honestly softer than they had been in years.  It truly works better than any hand cream I've ever tried, and I have tried lots of them.


The bottle has an eye dropper and I just rub a few drops of oil onto my hands just before I go to sleep.  It absorbs quickly and has not stained our bedding or my nightclothes, I was a little worried about oil stains but I guess it sinks into my skin so fast, nothing rubs off to leave stains. 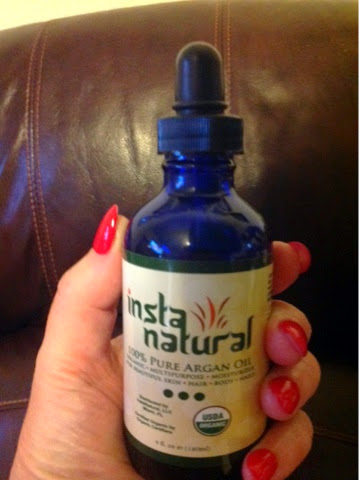 I talk about lots of frugal things but I do splurge sometimes, one is for manicures and I just got one today.  This red polish is quite patriotic looking and just makes me smile.

I also won a book on a rather new blog called Femme Frugality.  Link to Femme Frugality
I have not got it yet but it looks like a book that is right up my alley.


Lots of blogs have giveaways and contests. The smaller the number of entries, the better are the odds of winning so if I see a smaller blog with a contest for something I like, I usually enter. 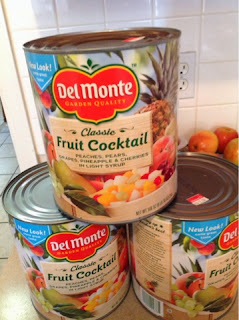 I found these giant cans of fruit cocktail for $2 - we mostly eat fresh fruit but canned fruit is well liked by my husband and grandchildren, these will come in handy, I am sure. 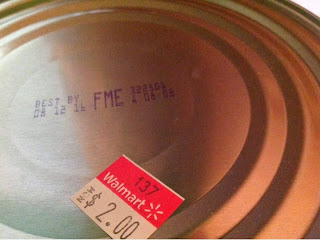 Got a free 8 by 10 print at Walgreens in one of their promotions before Mothers Day.

My husband spotted free Tide samples at Crest Foods in Oklahoma City and got us each one.

The weather has been frugal with mostly mild temperatures- we have run the heat a few times to warm up the house after a cool night and one weekend when it was in the 90s, the ac was needed, but for most part, no power has been used to heat or cool.

For 2 graduations, I made cards with some graduation themed rubber stamps bought years ago, wrote nice notes and mailed them off with checks inside. It was much easier than trying to pick out gifts and get them delivered,  I think graduates like cash best anyway. 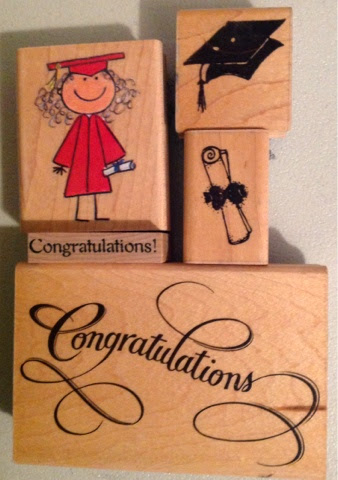 I bought some heavy cream for Easter but did not use it then. So, a few weeks later I used it make a triple batch of freezer biscuits.  I also made 8 pie crusts for the freezer.
In my hurrying to clean up, somehow the metal biscuit cutter with a porcelain knob screwed to the top for a handle fell into the garbage disposal. When I turned on the disposal, what a racket!  The knob broke into many pieces and one of the screws was lodged in the disposal. When my husband got home, he took off the disposal, took it apart, and pried out that screw. He had to spend about $10 on new  plumbing fittings when he reattached the disposal to the sink drain.  Thankfully, now that disposal is working good as new!

I used $14 in CVS ECBs that were close to expiring on a second pocket hose for the backyard.  I usually roll ECBs into another deal that offers more ECBs but the recent ads have just not has things we are needing.

Would you believe I have not been to a thrift store since my last finances on Friday post? 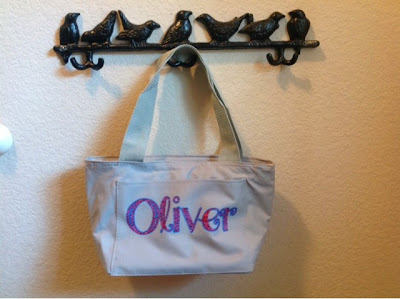 My daughter personalized this small insulated bag for us. When we do errands or take road trips, we always take bottles of water. This bag will hold 4 bottles.  She uses a Cameo and a Heatpress to put personalized designs on most anything and has had several sales through word of mouth and her Etsy shop. 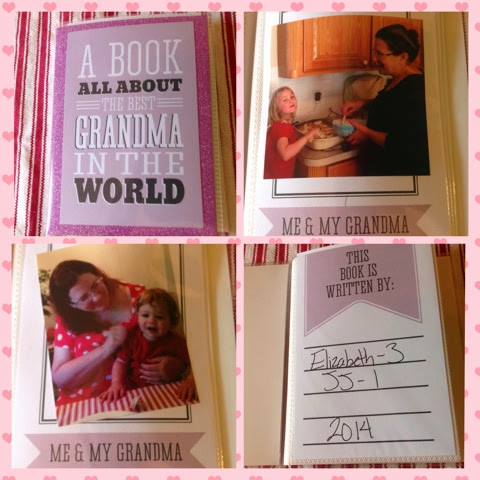 This little book is so sweet! It has more pages but the picture shows 4 of them.
it is one of those little gifts that will be kept and treasured always.

My son bought a bunch of succulents and brought them over with potting soil and pots.

We had fun sitting at the picnic table and selecting which plants to put together and in which pots. He took some of the potted succulents  home and I kept some. We both think ours have already grown quite a bit.
Posted by Rhonda at 1:17 PM 8 comments:

Retro - and quite delicious-strawberry pie

My mom found this recipe in a Betty Crocker cookbook - I don't know what year but I am guessing a 1960s edition or so.  She made it often, especially for Sunday lunch.

I copied down her recipe years ago and cooked it yesterday for our lunch today. 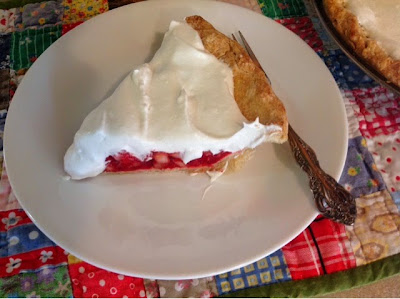 Below is a photo of my recipe card- I had to make one change. Sliced and sweetened frozen strawberries, they used to come in a rectangle can- are not sold anywhere around here. So I used a pound box of fresh strawberries, chopped them in about 1/2 inch size pieces and added just 2 T of sugar. Then I stirred them into sugar free strawberry jello, as the recipe said to. 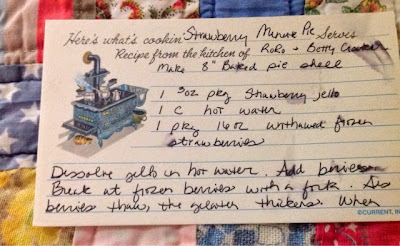 I used a 9 inch baked crust, instead of the called for 8 inch baked crust.
Today, it was topped with cool whip but it would of been even more delicious with real whipped cream.

Hope you all had a happy pleasant Mothers Day.  Some of our children were here today for lunch. I made this pie and quiche. My husband grilled chicken and my daughter cooked homemade Mac and cheese and 7 layer dip with chips.

Strawberries are plentiful and low cost right now.
If you need a quick dessert, I recommend this retro Strawberry Minute Pie.

Email ThisBlogThis!Share to TwitterShare to FacebookShare to Pinterest
Labels: cooking

We needed new water hoses and I did some research on the new compact hoses.

After scanning the 2000 or so ratings for pocket hoses on Amazon, it sounded like it would work for us.
Pocket hoses are not durable with high water pressure and with big yards. (We don't have either)

I was still a little wary so I bought one at Walmart so it would be easy to return if it was a huge failure. 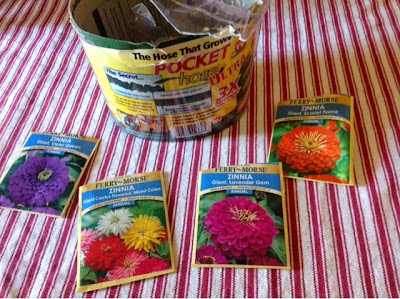 I used it today for the first time and I think it will be perfect for our small yard and for watering the outdoor plants. It is small enough to just wind it up on the faucet- no big hose reel or holder needed. 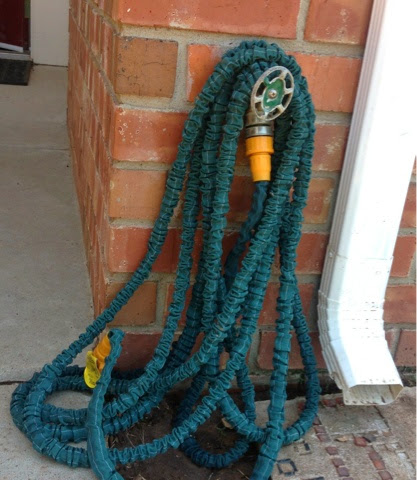 We've got an unplanted flower bed in the front and I think zinnias will be the easiest and least expensive choice. My husband picked out 4 packs of bright color zinnias. I mixed them all together and planted them in 2 rows this morning.
So hopefully in 6 weeks or so, there will be a hedge of colorful zinnias.

My mom always grew zinnias and I think they are so pretty and make really nice bouquets too.
But I don't see zinnias in other yards much - they used to be in most every yard.
Posted by Rhonda at 2:21 PM 14 comments: 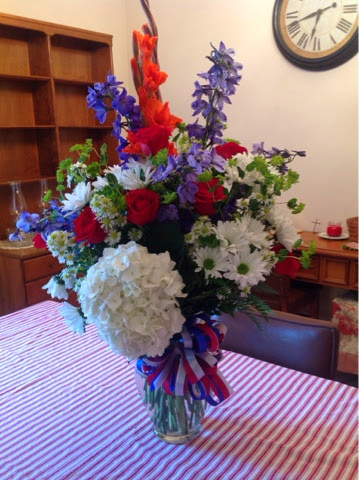 My son needed cookies for a work event.
Baking cookies is one of my favorite things to do so I baked 4 kinds 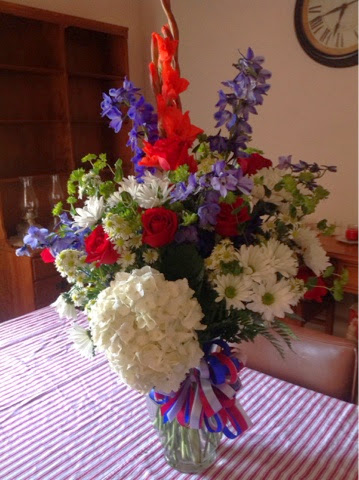 He offered to pay me but I declined, I prefer to just cook because I like to cook.
One of his events used this huge bouquet and afterwards, he brought them to me.
I think they are beautiful - white hydrangea and daisies, red roses, blue flowers that I have no clue as to their name and a big gladiola coming out of the top. 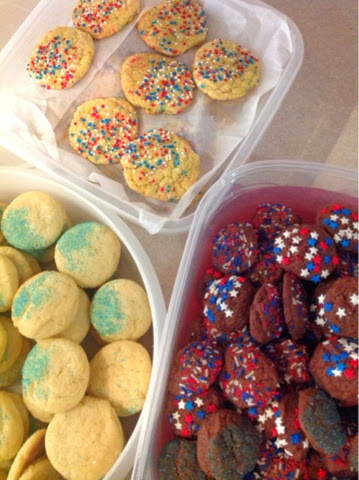 3 of the 4 batches of cookies - all decorated with red, white and blue sprinkles.
Posted by Rhonda at 9:13 PM 6 comments: