This is almost a week and half of what's been going on here.
I did some baking last week because my in-laws were in town 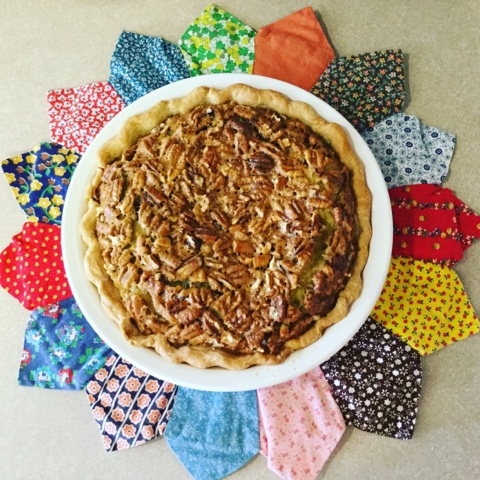 Pecan pie from my mom's recipe- and the pecans were picked by us in the fall.  Yes, it tastes as good as it looks! 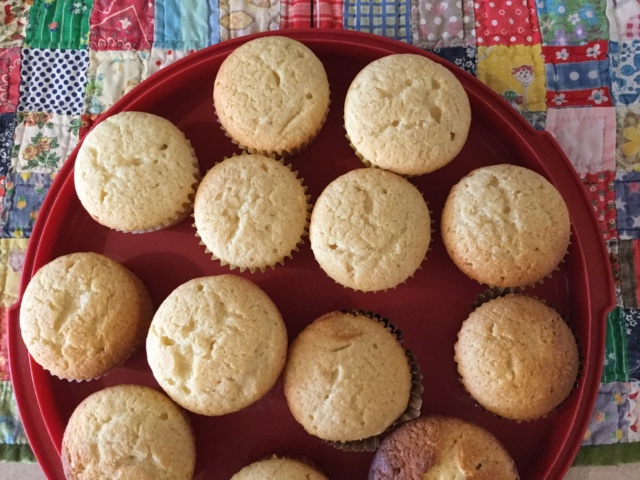 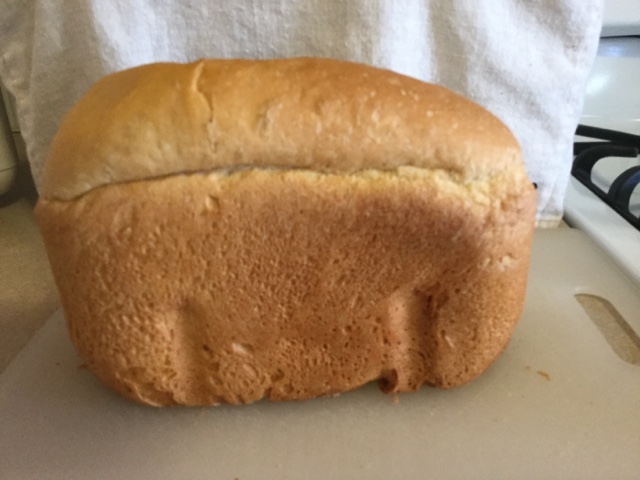 Bread baked in our Zojirushi machine- that machine has truly been a work horse. 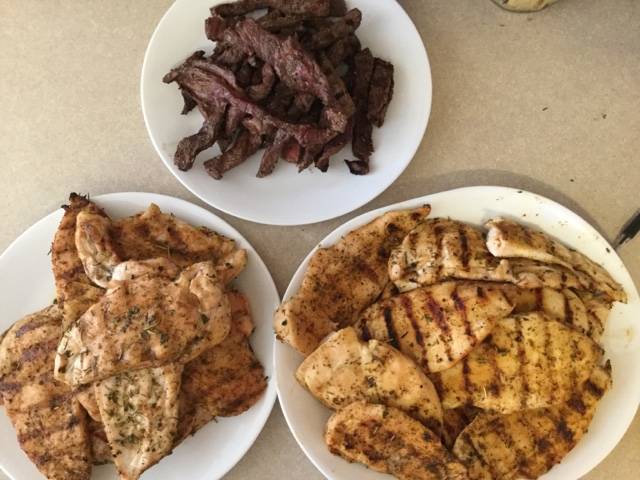 My son has been doing meal prep- this is a bunch of chicken breasts and fajita beef he grilled.  He bags and freezes it, then eats it during the month for lunch and supper.
He has also been making jar salads that he really likes.
Super Bowl snacks 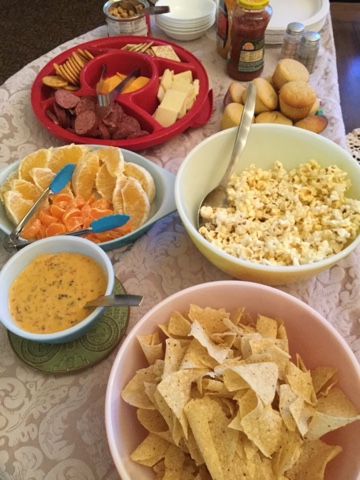 I just used food we already had - sliced cheese and smoked sausage with crackers
2 kinds of oranges
A bag of microwave popcorn with a few white chcolate chips sprinkled on while still hot - Yum!
Cheese dip and tortilla chips 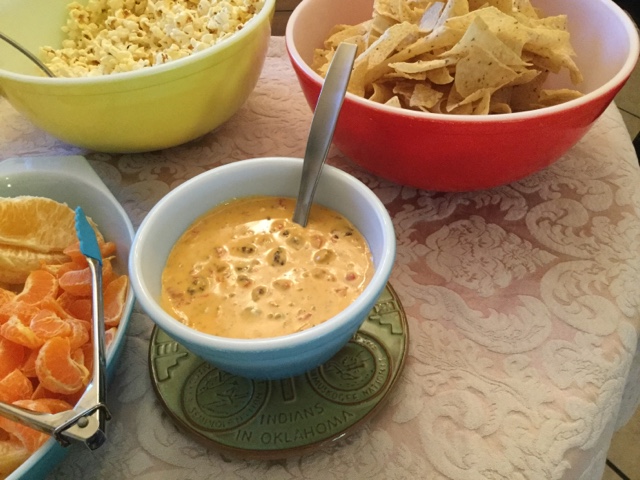 I used some of my Pyrex collection to serve it in.
Funny grandchild of the week 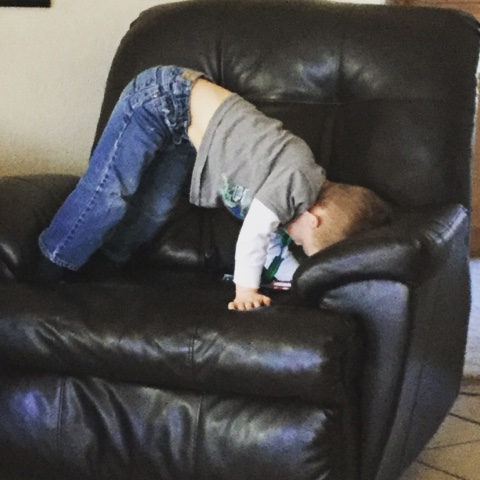 Braeden is watching PBSKids on an iPod.
I usually sit in this chair but I don't pose like Braeden.
I don't go to Walmart very often but I went this week needing 3 things I could only get there.
At the front of the store,  there were 2 buggies full of Star Wars merchandise from the newest movie and EVERYTHING was 25 cents each.  Lots of shoppers were digging in the baskets and I ended up with
9 sets of little boy pajamas - I still can't believe they were a quarter!
3 water bottles
2 Darth Vader soft balls
And a bunch of glow stick toys. 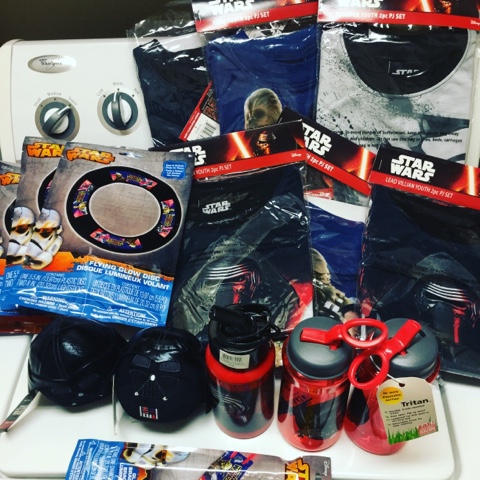 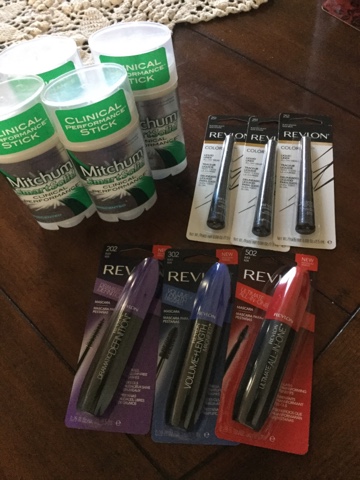 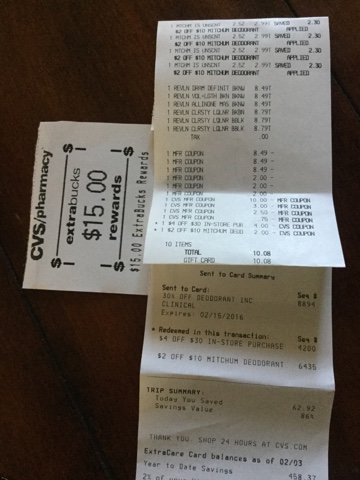 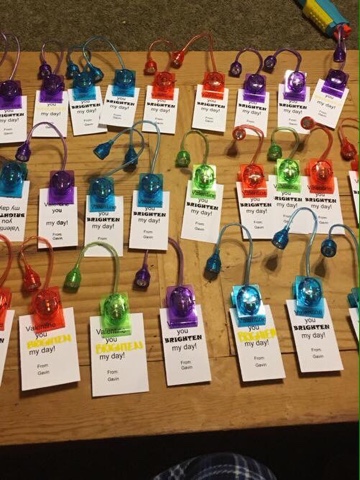 Our daughter in law did these cute Valentines for Gavin in first grade.  She got the book lights at Dollar Tree.  They say - Valentine You brighten my day.m 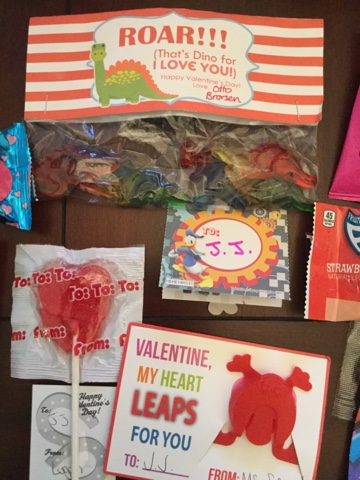 These are some the Valentines that JJ got at his church preschool party.  He wanted to eat the dinosaur gummies first and he made dinosaur sounds through the whole bag.
Can you guess what my husband and father in law are doing? 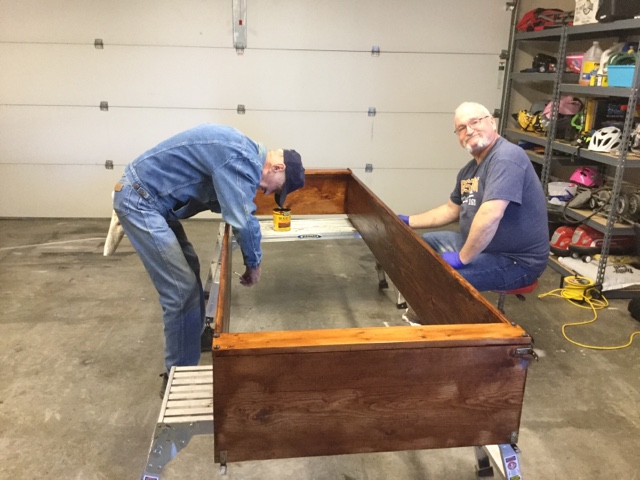 They were staining the wood on this giant bookshelf
Ta-da! 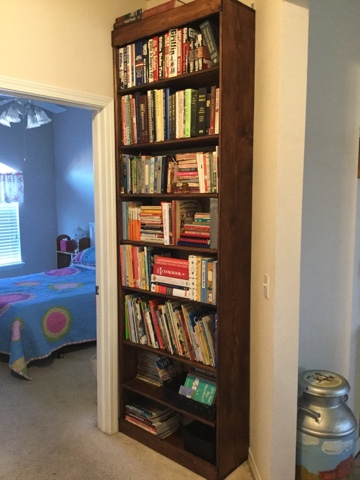 There is this nook in the hall and after living here for 13 years,  it dawned on me that a floor to ceiling bookcase would be great in that spot.
So now that husband is retired, he has time and energy to work on things like this.
It is attached to the walls and holds so many books!
It's 8 feet tall. 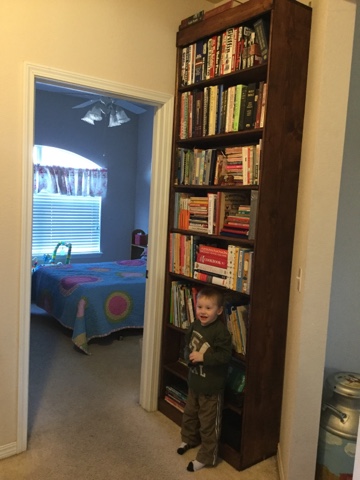 Children books are on the bottom 3 shelves
Cookbooks are on the 4th
Bibles and adult fiction are on the top 4.
That's what's been on going at the If You Do Stuff home.  We've been doing lots of stuff and I'll have more pictures for you all soon.
Happy Valentines Day everyone.
Posted by Rhonda at 7:52 AM

That is a beautiful bookcase, you can't buy one like that without spending a lot. Cheryl

That bookshelf is absolutely wonderful!

Braedon is just too funny...don't they love looking upside down! Your pecan pie looks so delicious! Some great food! Have a great Sunday

I always love seeing what you're up to with your family and all the delicious things you are cooking and baking. Kudos to your husband and FIL for staining that huge bookcase - looks great!

Oh and I love the mat under your pie!

Love your new bookcase! Do you have a list of projects for Jeff to work on now that he's retired?

You've had a very busy time! I love the new bookcase too. I can't believe how inexpensive those Star Wars items were at Wal-mart! I thought I had a deal buying a few SW tree ornaments filled with candy at a $1.99 each, lol. I didn't get them at Wal-Mart but I'm pretty positive nothing was selling in Canada for 25 cents.

OK, now I'm hungry! What a great buy those pajamas were! I never heard of WalMart selling anything that cheaply. That was a really cute idea about the booklights for Valentines. That's a nice bookcase and what a great use of space. Have a happy week!

Great bookshelf and I love the mat under the pie. I might have to borrow that idea!

What a great book shelf for that spot! Wow quarter pjs. I noticed the mat under your yummy looking pie too!

You have been doing a lot! I also like the mat beneath the pie, the bookshelf an all the delicious looking food! Hope I have close to that great of a week this week

I just love those Taste of Home recipes. I use many of them when I teach 4H because the ingredients are usually inexpensive, and the food is so normal. I did try a curried lentil soup with cilantro-apple salsa from another magazine with one group this time, but it was not to their taste and no one would eat it, even though it was trendy. After those kind of experiences, I usually revert to the Taste of Home website!

Your bookcase looks lovely. How satisfying to get that up, I'm sure.

Love the grandson watching the iPad. Aren't the grandkids great? WHat a deal on the PJ's for all your little guys.

That bookshelf is quite amazing. We love our Zojirushi bread machine, too. I use it at least 3 times a week for bread and dough.

Where do I start....the food looks delicious....the bookshelf is so pretty....I love the Valentine's. Your daughter is talented like her mother.

Wow, what a big post. All sorts of stuff happening at your place. Love the book shelf, so nice. I love all your glass wear and Pyrex, so vintage.

Love the bookcase! I have a 7 ft. bookcase that I love because it holds so much.

Love the bookshelf! So great to have a handy husband to build things.
Great deals! Your pie looks delicious as does all your snacks. I'll have to remember chocolate on the popcorn.
What a cute grandson. When I was little, I remember spinning around and making myself dizzy. I surely can't do that now. :D
Have a great week.

I finally found a few moments to catch up on some blog reading. I love your new bookcase - 8 ft. tall, isn't that nice! Also, your new dining table is beautiful, I am excited to see the new place mats you make for it.

Your bookcase is very nice, and I'm glad you've fastened it to the wall! They can be pulled over so easily by a child.

What a lovely blog you have, Rhonda! This is my first visit, and I am enjoying it immensely! God bless you. :)

Rhonda I read this post as email last week but I agree I am almost envious of the little boys pajamas. How my grandsons would love those. And that picture of Braeden does tickle me, lol.

I loved this "what we've been doing" post. The baked goods look amazing especially on the quilts. I need to do some sewing.

I want you to know that the things you sent have been an enormous blessing during this time of my husband's unemployment. You are a great encouragement to me, too. Thank you so much. Sometimes it helps to know someone cares and is praying for you.

That bookcase is perfect! Perfect for the spot, and so glad it is anchored to the wall, wouldn't want to have it fall on the little ones. And good idea of having the books for little ones on the lower shelves. Nice job! My husband keeps talking about the projects he wants to do but can't until he retires. He still gets lots done anyway.

All of your food looks so delicious!!

Just found your blog through Teri Cheney, so glad I did.