thank you to all the entrants, this contest is closed 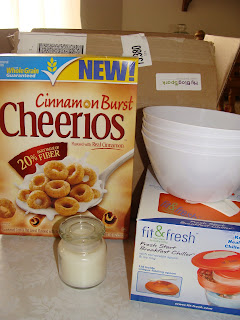 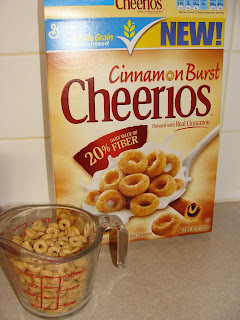 I opened my box  to try them.  A cup of Cinnamon Burst Cherrios has 110 calories so with a 1/2 cup of skim milk, it is  just 150 calories for nice breakfast or afternoon snack.
They have a very nice taste, the cinnamon is good but not too strong  or too sweet.

MyBlogSpark is providing a Cinnamon Burst Cheerios gift pack to give away to one lucky USA reader of my blog!

If you would like to enter to win the same giftpack that MyBlogSpark sent me, and I hope everyone who reads this will enter, just leave me a comment and tell me what you do get your day off to a happy start.
You don't have to twitter or facebook or follow me but if you want to put it on your blog as well,  you will get an additional entry. 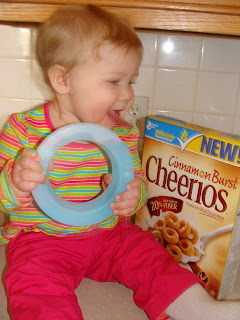 Granddaughter Elizabeth thinks the cold  ring from inside the travel container makes a very cool teething ring.
It is filled with that liquid that freezer packs are made of, so she only got to hold it a minute.  The ring is NOT a safe baby toy.

Legal stuff - Cheerios provided me with the free product, information, and gift pack through MyBlogSpark
hope you will enter!
Posted by Rhonda at 8:09 PM

To start my day off, I usually get up shower,then have a glass of ice tea, start a load of wash, go to blogland, iron clothes, pack lunch and get ready for work.I usually start the car before getting ready. That is my normal routine.

I never heard of Blogspark. This is so neat. I would love to enter in the giveaway.

Oooh... I love cinnamon and would love to enter this giveaway. My normal routine is to roll out of bed at 3:13 am, put dinner in crock pot or pull out of the freezer, make a cup of tea,feed the pets, get dressed and out the door at 4:00 am to head to work. I listen to some great songs on the iPod for the 40 mile commute to work, that usually perks me up. I eat breakfast at work.

OOH OOH enter me pls :-D I start my day off with peace & quiet, a cup of coffee & my Bible - I so love my mornings before everyone else gets up!!!!!

Who travels with a bowl of cereal?!?! sounds weird to me. Anyway, miss you mom! - Jim

Elizabeth is getting so big! They do grow up so fast, don't they. And it looks like she is going to be a hands on kind of girl when it comes to solving a problem...that is one big teething ring...lol.

To start my day off, I wake up and praise the Lord first of all. When I forget or am too rushed for my morning time with Him, the rest of the day seems to fall apart.

They sound tasty. I start my day with tea and getting lunches packed and seeing them off for work and college classes.

I normally start the day off with peanut butter toast or raisin bran! The cheerios would be a nice change of pace:)

I start my day by readding my Bible and praying, that helps me have a very happy day

I've been starting my day recently with oatmeal but I did see the new Cinnamon Burst Cheerios at the grocery store the other day and thought I'd like to try them sometime. The low calories certainly are a plus!

My day gets off to a happy start with caffiene! :)

I always start my day off with a mug of coffee, then after checking emails, I usually will scramble some eggs or have some cream of wheat while hubby munches on Honey Nut Cheerios! :) He might like to try the new cinnamon ones! Of course, at least one day of the week we have a "not so healthy, but good" breakfast with sausage or bacon.

Thank you for hosting this giveaway

Well, the best way to start off my day (usually Saturdays) is no alarm, hubby getting up to feed our 4 children and me sleeping in!! :)

I start the day in prayer. The best way to start a day. Thanks for having the contest.

I start the day with a kiss from my husband!

I start my day with coffee and my favorite creamer! Just holding the warm cup feels good.
clarksrfun at gmail dot com

I'm a fan of cereal once I doctor it up with fruit and nuts. This cereal looks yummy!

I start with prayer and a reading from a spiritual book.
rbjj32825[at]lycos[dot]com

I always start my day with a cup of coffee! I love cereal, but not in the morning..I like it for a late night snack!
sandramasters1@bellsouth.net

I always start my day listening to our local oldie's radio station. It makes me laugh:) Thanks,
Kelli!

Strange to say, waking up an hour or so before my kids - that me time helps me prepare for all that is going on that day without interruption! hpb157@yahoo.com