Another morning in the kitchen

Hello everyone
First to answer a few questions-
Cheese has always kept just in the freezer for us.  Sometimes I freeze cheese that I shredded and sometimes I freeze the pre-shredded cheese.  I can’t tell any difference in fresh cheese and thawed out cheese.
Daughter and family are still living here.  Work is happening almost everyday at their new home but construction just takes awhile.
About nonstick cookware, many of them say “lifetime warranty”. But in my experience, they all start sticking after a year or so.
It’s hard for me with the cast iron, as it is heavy and my mind thinks you need soap to clean stuff.  But I use a scrub brush, hot water and sometimes a little salt.  Then I dry the skillet and use a paper towel to rub it with just a few drops of coconut oil.  So far, my big skillet is staying clean and I like using it.  I have 2 smaller skillets that I cleaned and re-seasoned. But I haven’t got in the routine of using them.
With 7 in this home, the really big skillet makes the most sense anyway.
About the 2 girls that came for the supper the night we had apple crisp,  it was no drama, just 2 sweet girls from out of town that had the same classes as our son and all worked at the same restaurant.
Now there was another night with some drama around that same timeframe. A different son had a girlfriend name Stephanie but they “broke up”. Then he quickly started dating Luanne. We had a family gathering around that same time and the son came with Luanne and somehow Stephanie knew about the party and she also came.  Nothing crazy happened but we were certainly on pins and needles wondering what might happen.
On to today,  I wanted to try White Lily flour after seeing it on Southern cooking shows. Daughter and husband made a quick trip to South Carolina for his work and brought me back two bags of White Lily  flour. (Stores in my Oklahoma town don’t carry this brand)
So I’ve been looking on the White Lily website and found a few recipes and started them today. 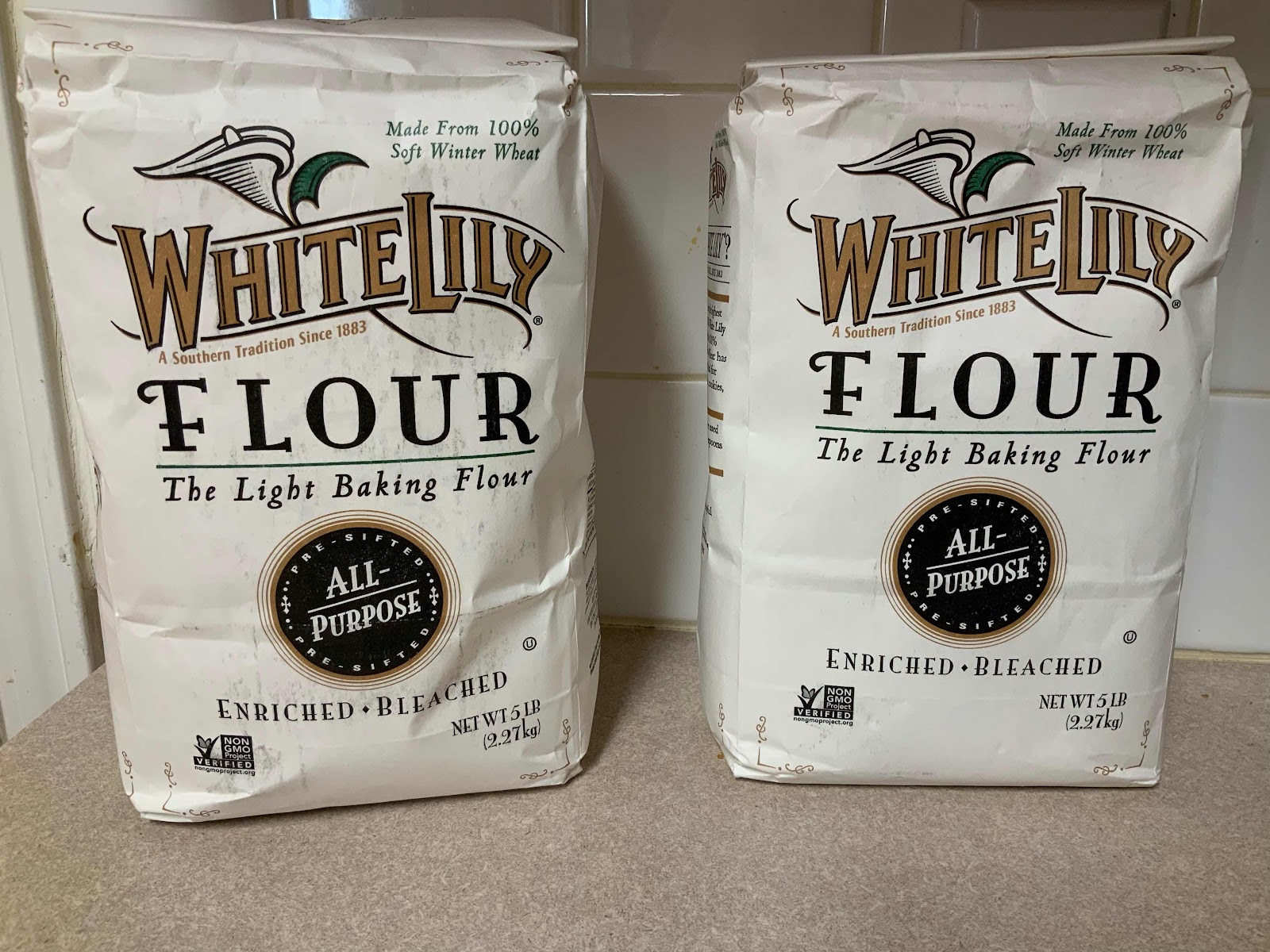 Today is Friday and we almost always have pizza so I made a double batch of pizza dough. The website says pizza will be thinner and crisper made with white lily. Tomorrow is Saturday and we usually have a big cup to breakfast so I mixed up some ingredients to make biscuits. I use the recipe on the back of the bag and it calls for shortening. I don’t use shortening very often but I had a small can in the pantry. It was still in date but it smelled rancid so I just used butter instead. I also mixed up a batch of refrigerator chocolate chip cookie dough that you shake it to rolls and then can just slice off before you bake them. And granddaughter Elizabeth has been asking for peach halves that are filled with cream cheese mixed with chopped pecans, powdered sugar and vanilla.  So I made a batch of those too. 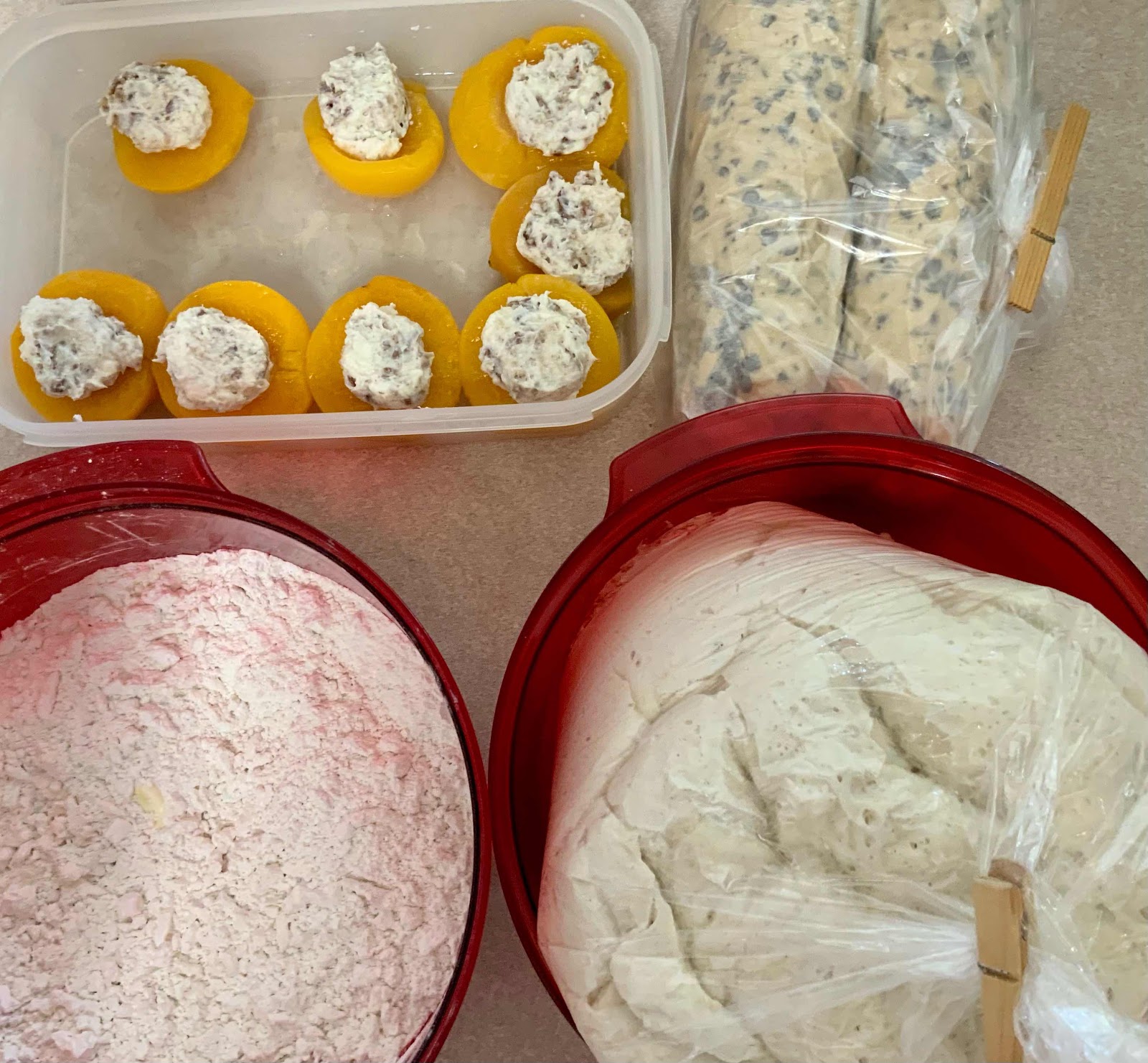 Everything waiting in the fridge for supper and breakfast.
On the right is a big pack of thick sliced that we bought from a fundraiser from grandson Gavin’s FFA group.
I think the breakfast eaters will be especially happy tomorrow. 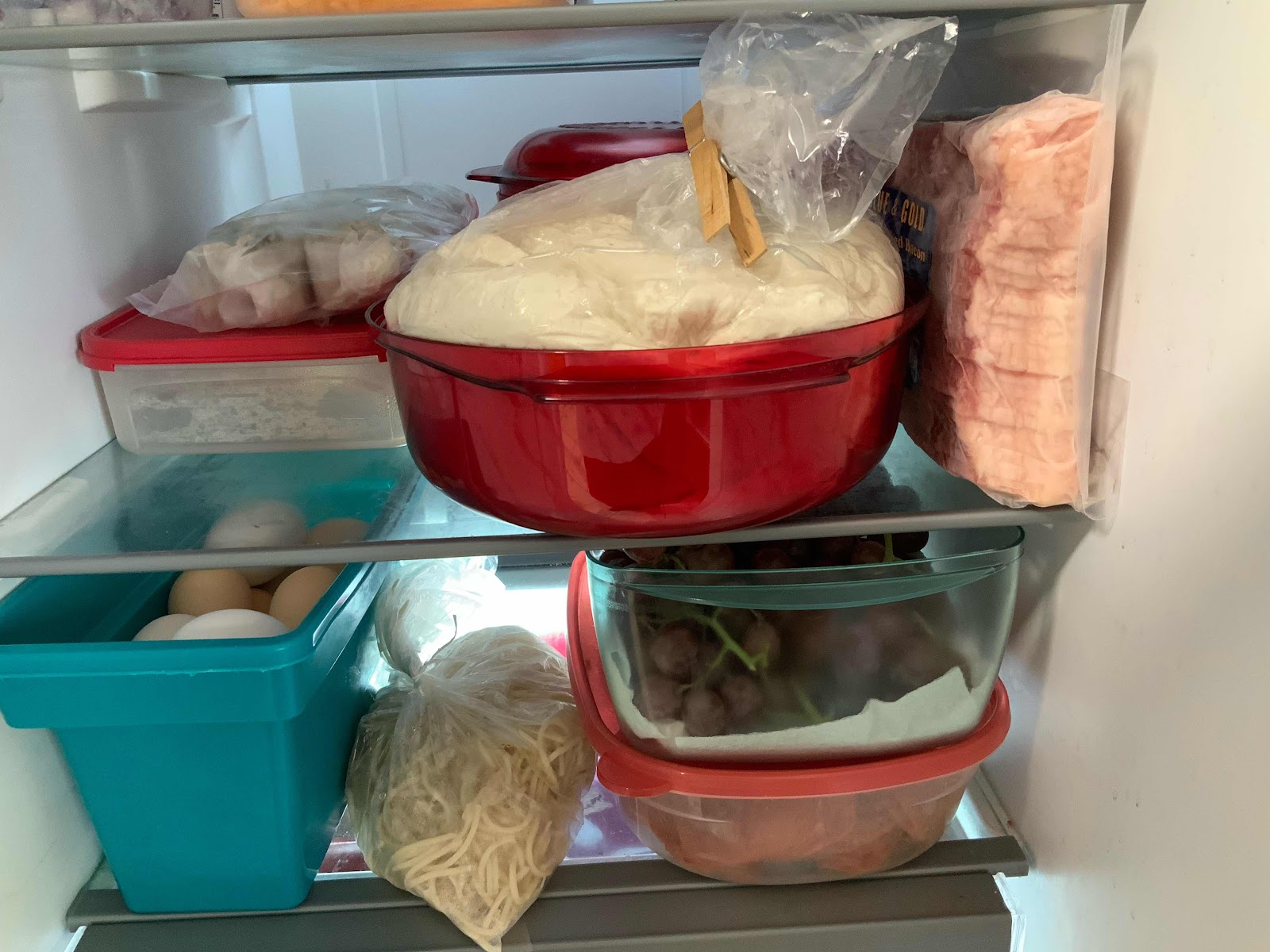 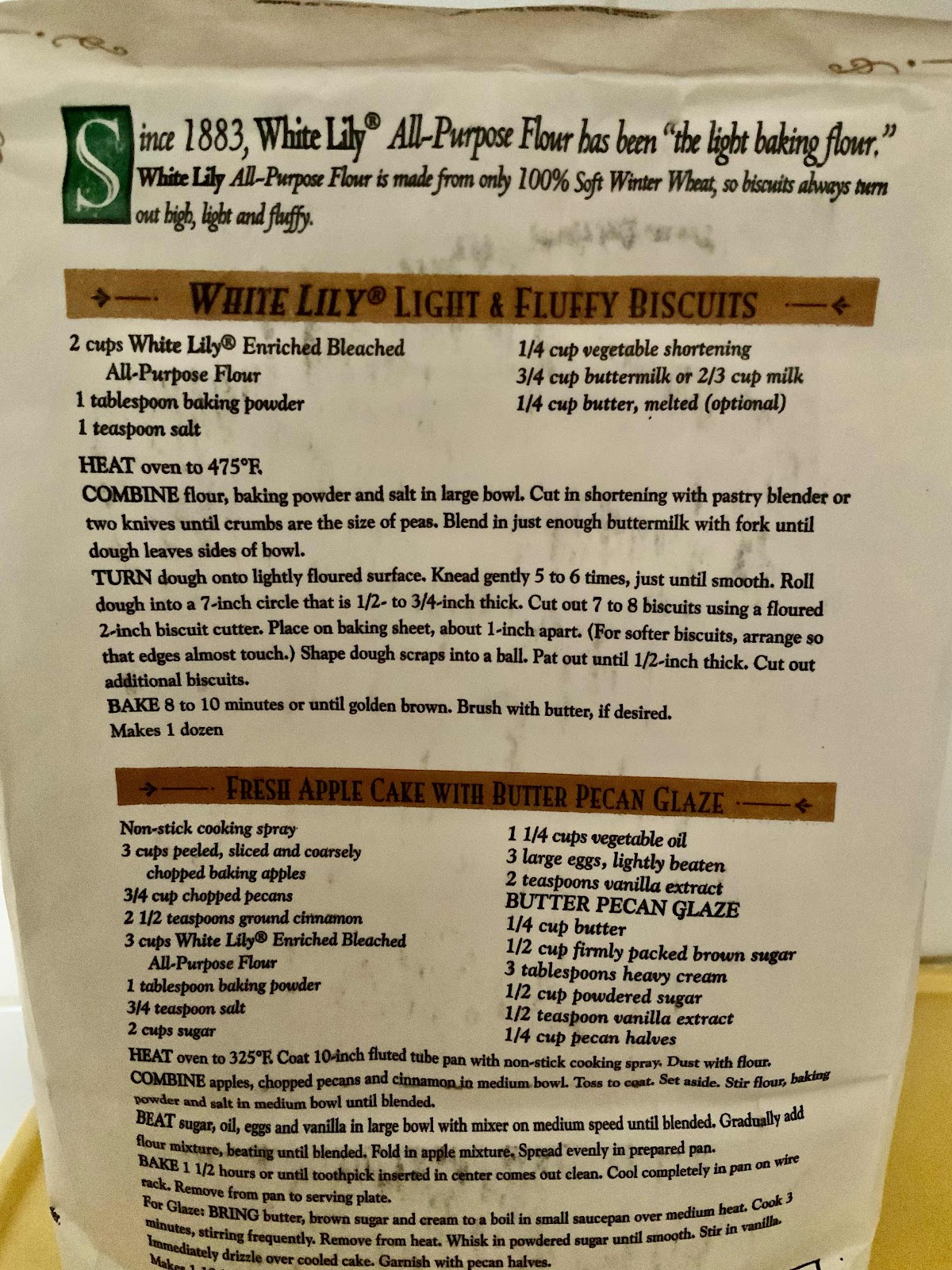 This is not a sponsored post. I think you might have to say that whenever you are talking about a product these days.
And I haven’t actually cooked any of this yet. I’ll let y’all know in my next post how it all turns out.
❤️Rhonda
Posted by Rhonda at 2:32 PM

I keep crisco in the fridge as it will turn rancid before used. It is just too expensive. Love this cook ahead method.

Sounds like you have been quite productive.
I have never used that flour - I use whatever I find!

We are in SC and White Lily is a staple in our house. I know many would not agree but the real buttermilk makes all the difference over the substitute. We always have buttermilk in the fridge.

My husband's stepmother in NY was thrilled to come down South and visit us because she could get White Lily flour. She was convinced it was the best from the Grand Ole Opry or some radio show. What is the recipe for the peaches? Do you cook them?

Found All Clad non-stick skillets on Amazon, and they're by far the best I've ever owned. Raised in the South, I often cook with cast iron skillets and love them. But there are times when non-stick are needed. We love Bob's Red Mill flour here in the PNW! And our Costco carries organic all purpose flour that's great. I've heard of White Lily but never used it.

Can you share the peach recipe? It sounds simple but I've never heard of this.

I use soap on my cast iron all the time. Mine are well seasoned & well broken in. The key is to dry well so I dry with heat. At the end of the day I wash all the cast iron from the day in a sink of soapy water, rinse well then turn upside down in a hot oven. I just leave them in the oven to dry. If I'm just cleaning one skillet I scrub under running water...sometimes with soap, sometimes without....then dry in my toaster oven on the highest toast setting. This is how my mom, my aunt & my grandmother all cleaned their cast iron & we've never had them rust.

Companies do not care if you say nice things to entice people to buy their products. The reason people say it is not a sponsored post is so that readers will not think you are being paid to say the product is great.

People around here (KY) swear by White Lily. Especially the older ones. It's the only brand my in-laws and my husband's grandparents and a lot in this area would ever buy.

You have been very busy.

I am glad that there was no drama when the old girlfriend showed up.

I love White Lilly self-rising flour. It makes the best biscuits! It is a little hard to find here in Michigan so I make sure to stock up when I see it.
I keep the iron skillets I use the most on the stove top burner I don't use as much. Keeps me from bending down to reach it in my stove drawer. They are heavy!

I rarely bake anymore but when I do, I use either King Arthur flour or Bob's Red Mill. My mom is from Kentucky and she said that White Lily flour is THE best flour for biscuits. We used to not be able to get that flour here in Illinois so my mom would pick some up when she went back to KY, but now a huge grocery store here - Woodmans - carries it.

I've never heard of that brand here in Missouri. Hope it all went well for you. Blessings, Laura