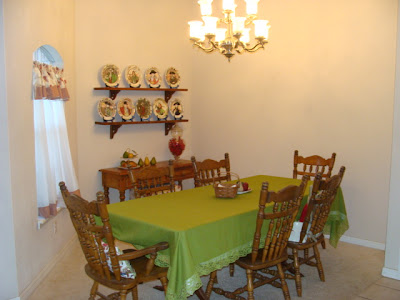 Way back in August,  I started a re-do of this dining room.  Then in September,  I sewed up the new curtains and swapped around some furniture.   This weekend,  Jeff did this woodworking project of building a pair of shelves to hold his plate collection. 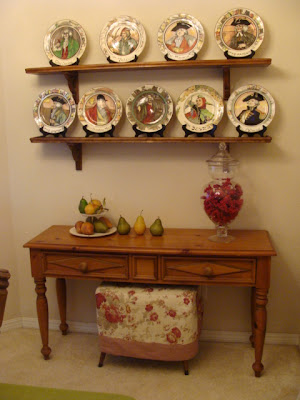 He stained the shelves to match the buffet table and the dining room chairs.  He worked hard and measured and measured again.  He was worried they would be crooked or off-center but I think all his efforts paid off, and he got them straight and even. 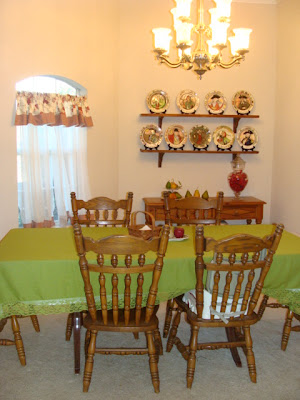 His plates are the Professions, a line of plates put out by Royal Doulton. 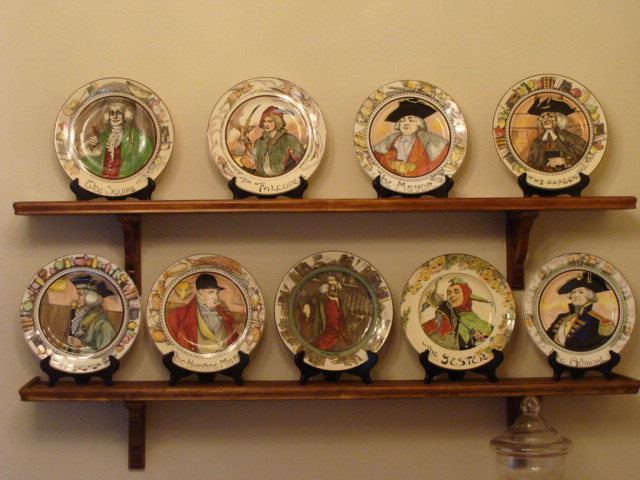 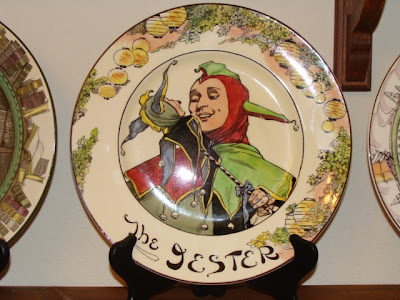 Jeff's grandmother had a huge plate collection.  A big wall in her farm house was covered with plates, many were gifts from friends and relatives.  She had a  lot of souvenier plates and state plates and holiday plates.  She let all the relatives pick out the ones they wanted  and she wrote their names on the back with permanent marker.
I think Jeff picked out the classiest and most valuable of all the ones she had, at the time, he was just a kid and had no idea what they were, he just liked them.
After he got them,  they pretty much went into a cabinet.  Years later,  we saw one of the plates on a British tv show called Bargain Hunt and Jeff started doing some online research on them.  He bought a few on Ebay and then we found 2 more at the Antique Mall in our town.
This summer, he got the oldest and hardest to find one, The Bookworm, on Ebay and it completes the set.
I really like the plates on the shelves,  and how nice that they are mostly green and red and match my green yard sale table cloth and the vintage rose fabric I used on the curtains and stool!
﻿
﻿


So making this room pretty again has taken awhile but I am really happy with it.  There is still one huge blank wall but I can live with it.

This project really went with my Tightwad October theme too.  We did spend money on the wood, stain and hangers to make the shelves.  But everything else was just re-used and things that we already had.

I am linking this to Cottage Instincts Make it 4 Monday.  This is a wonderful blog with lots of links to other decorating projects.

It looks great and what a wonderful budget too! I agree that the plates go extremely well with the new look. Or is it the other way around ;-)

P.S. I just noticed you have have my blog on your list. Thank you so much! xx

Beautiful plates. Sounds like Jeff knows the old carpenter's adage of "Measure twice, cut once." He did a wonderful job!

Jeff did a great job!!!! His plates look splendid on the shelves and your dining room looks good! I'll venture to say that you'll find something to put on the blank wall at some point. :)

What a great collection, with a story behind it too! Looks good Rhonda.

Those look fabulous, your room has a bit of an old world feel to it. It looks very nice, my friend. I love the plates, what a great collection, your hubby should be proud of the plates and of the lovely shelves that he made for them.
Hugs, Cindy

The room really came together. Looks nice. Jeff did good with the shelves and picking a cool collection.

Your dining room looks fresh and beautiful! I love the clean, uncluttered look of it. That shade of green is so nice, too!

lookin good. I had a green table cloth like that once. Now I need to go look see if it moved with me ! good idea !!

Rhonda,
Thank you for your sweet comment on "My Favorite Photo", and I think the wagon had miniature pumpkins in it. That is sure what it looks like it is, anyway.
Hugs, Cindy