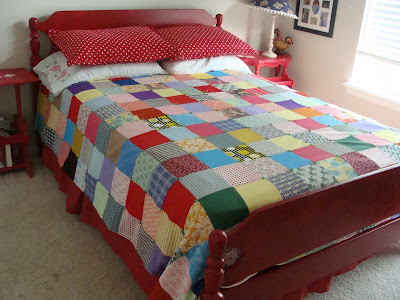 This bed belonged to my paternal grandparents.  When it was passed on to us,  it went to Nina's room.  She then took it to her college rent house and then she passed it on to Jimmy while he was in grad school.  While it was in their possession,  it had several paint jobs.  We just got it back and it had brown paint in some places,  white paint in other places and then a weird attempt for gold antiquing finish it others.  I know, I should of taken a before picture.
It also needed some new bolts.
Anyway,  Jeff worked on in yesterday.  He sanded it down and gave it 2 coats of dark red paint.  This morning,  he moved it into one of the guest rooms and added some L brackets for good measure.
I am so happy with how it turned it out!

I think it looks like a picture from some the Early American decorating magazines my mom had in the 60's and 70's.
The quilt was made by my maternal grandmother.  It is all double-knit fabric and will probably never wear out.
Another Rhonda, also in Oklahoma,  just posted a picture of  a double knit quilt her mother made about the same time my grandma made this one.
patchwork pathways 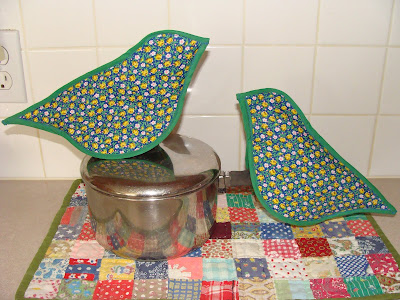 I made new potholders a while back, but I cook so much that they are getting rather worn out.  I did a few swagbuck searches for potholder tutorials and found one I think is darling,
Betsi's Darling Starling potholder tutorial
I made mine a little differently than Betsi.  She used a retro pattern for her inspiration and uses felt and stuffing for the insides.
I updated that part and used potholder batting instead,  several manufacturers make it and most fabric departments carry it.  It looks almost like quilt batting but has a silvery side that does a very good job  of heat blocking. 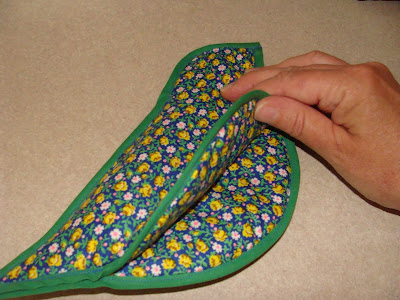 There is a open pocket section on the belly just right for picking up pot handles and pan edges.  I also used a narrower bias tape than Betsi as the narrower kind is what I had.
Thank you Betsi for the cute tutorial.
Posted by Rhonda at 3:50 PM

That bed is just too perfect! Love the red and the quilt and the cute pillows. Those potholders are just adorable! I do Swagbucks too - isn't it great! I haven't paid for books in a long long time!

The first thing I thought when I saw the photo of your grandparents' bed (very cool, btw)was that the quilt looks just like the TV blankets my grandmother made my children when they were little. Those blankets were also constructed of all knit fabrics, and are heavy and warm. They both use them still.
Love your potholders! I need some new ones and have been thinking that might be a good Make Do and Mend Monday project...

The bed looks great! Yes, it really does look like it's straight out of a magazine from the 60-70's. Very cute!

The potholders are really cute, too! You did a great job on them!

I like the bed AND the quilt! I appreciate the link you included. :) And, I like that potholder with a "pocket" in the edge of it, that would be HANDY. Take care!

The bed is wonderful and that red paint is just so perfect for it. What a marvelous old quilt, I remember those! I have one with a little bit of the polyester on it. I love it! They are treasures from our past and it is so nice to have them, isn't it.
Your potholders are so cute!
Have a lovely day!
I was wondering if you are in OK, my mom is from Tulsa, and I have lots of cousins in the Dewar/Henryetta area. Dewar's mayor is an old friend of mine. Just curious.
Hugs, Cindy

I have a double knit comforter from my Grandma too. It is quite durable! My sister and I each had semi-matching ones on our beds (which look suspiciously like the one in your picture-haha!)growing up.

Hi Rhonda, I love the quilt, bed and the potholders. The first picture really does look like a picture in a magazine. Love the potholders. I need to check out that tutorial. Thanks.

I love, love, love the bed. My sister has a double knit quilt that our grandmother made. She loves it!

The pot holders are super cute. I'll have to visit the link to get my pattern.

Loving that bed and quilt!!! How nice to have these things from your grandparents. I hope that quilt never does wear out since it needs to go on and on for your family. I so want to make a tie quilt again since I always go for extensive hand quilt but love the old fashioned look of a tied one.

Those potholders are soooooooo cute. I made some before out of hexagons that fold over but love these. I found a pattern from Martha Stewart recently of a heart that folds over and was going to make some. These are just adorable.

I love your red bed. You should move your chair painted red into that room as well. LOVE the little birdie potholder. I see one of those in my future!

I meant to add as well that I have a bedspread just like that one that my mom made during the 70s. I need to get it out and use it as well!

Hi, Rhonda~
The bed is beautiful! I love the color!♥ The quilt goes so well with it too.
Those potholders are adorable...shaped like a little bird. :)
Have a great week.

Anne Marie@Married to the Empire said...

That bed is just gorgeous! I adore quilts. I'm excited because a cousin of my husband's has already asked if she can make a quilt for our baby. Um, YES!

And those potholders! I love birds! How very creative! This makes me want to work on developing my sewing skills!