hello everyone.
Two of our grandsons were here one day this week.
They had so much fun at one of our city's splash pads. 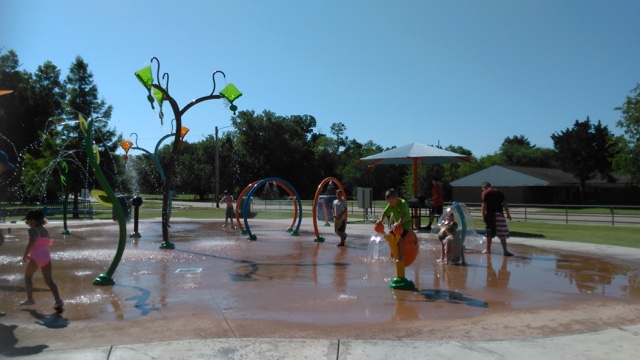 They also played at the playground right beside the splash pad.
Both of these are part of a public city park.  They are well maintained, clean and free 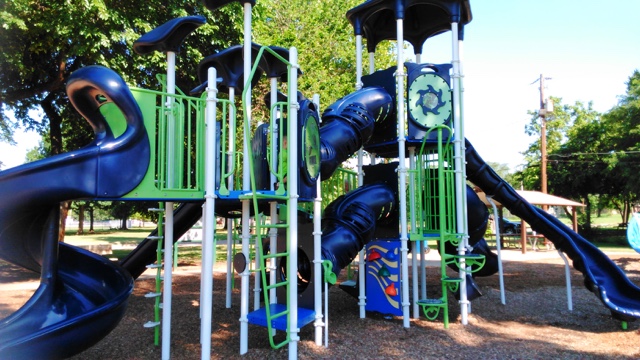 I didn't plan this trip to include lunch but the boys remembered that  lunch is served everyday here by the school as part of the Federal summer nutrition program for all children 18 years and younger.
They really wanted a sack lunch so stopped there too.


This day's sack lunch was a peanut butter sandwich, string cheese, apple sauce, juice and milk.  It was getting hot so they took their lunches home and we ate inside. I like those yogurts that come in a 2 section container with yogurt in one and a crunchy stir-in in the other section.  I got them awhile back on special but in general, they are rather expensive.  So I thought I could just buy a carton of yogurt and add some crunchy stir ins myself.
I took those 2 grandsons to a grocery store that has a bulk food section,  I planned to get things like granola and trail mix
but they had other ideas, 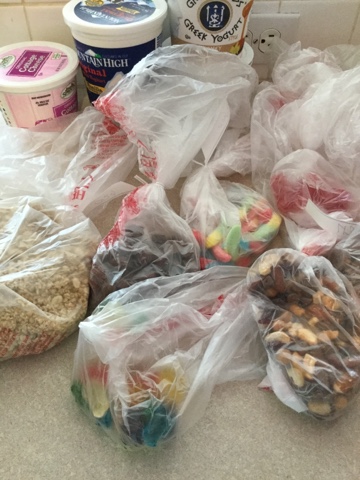 Can you guess which toppings I picked out and which ones the boys picked out?
To keep it frugal,  I did the scooping and kept the amounts of the boypicked topping very small. 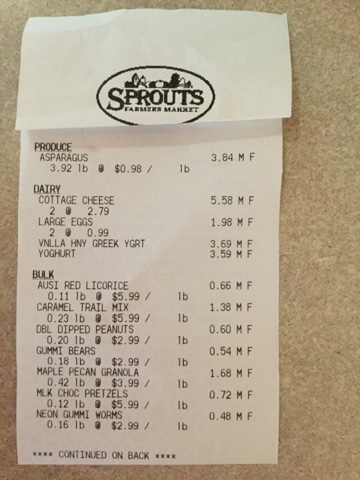 Even after they ate all their sack lunches,  they both ate some yogurt with gummy bears and sour worms mixed in.  I guess all that playing made them very hungry.

Food Prep
We will have company this weekend so we planned some very easy meals.  My husband helped me prep all this produce
- 2 fruit trays and a tub of watermelon chunks
-a dish of greens for salad and a tray of chopped veggies to top salads
-a tray of toppings for burgers or sandwiches
- chopped cheese 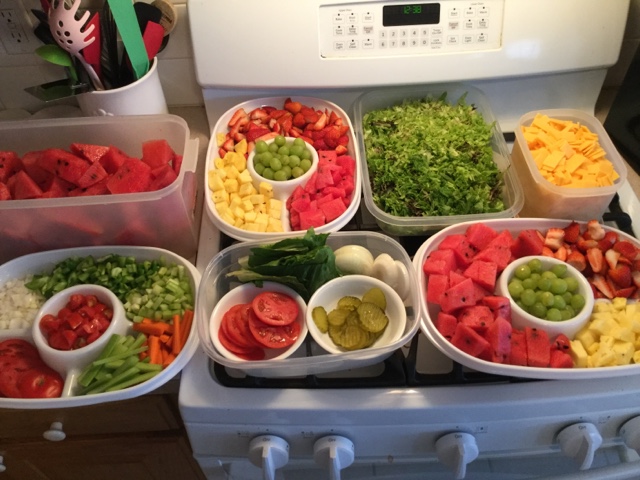 Several of you commented on my lunchmeat keeper.  I bought mine years ago at Goodwill for $1.  Tupperware has made several models of it and this is the current model.  I think it's bigger than mine and that would be nice but I'm not going to spend $27 on it.  But if I see it on sale, or at a thrift store or yard sale, I probably will. 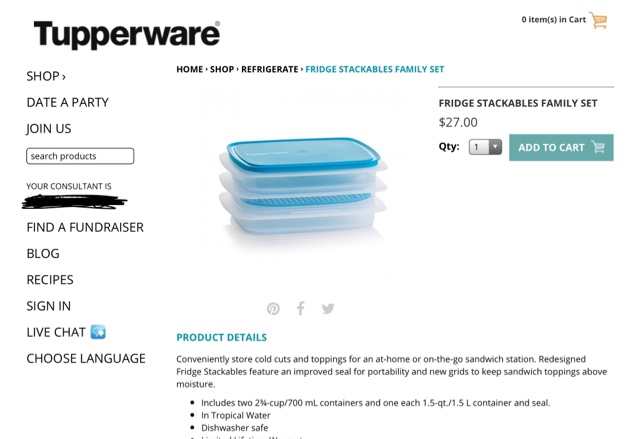 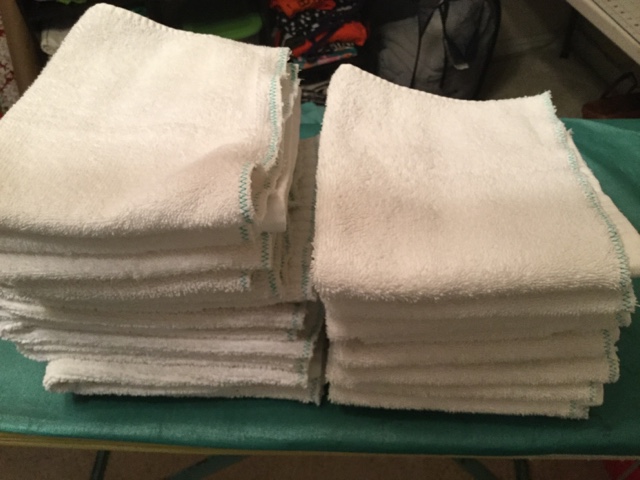 For Day 3- I sewed a cover for this box of paper
sheets that we keep  on top of the microwave.  We use a sheet to cover up food so it doesn't splatter all over the microwave insides. 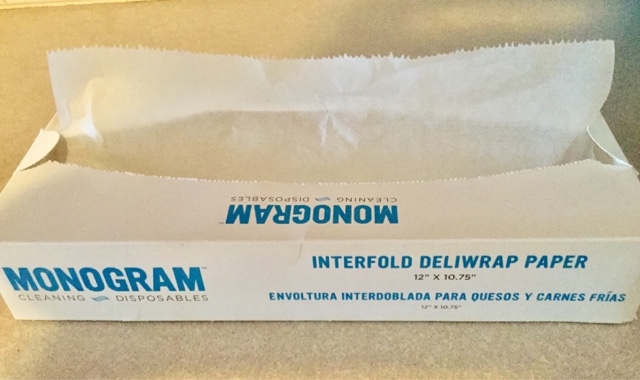 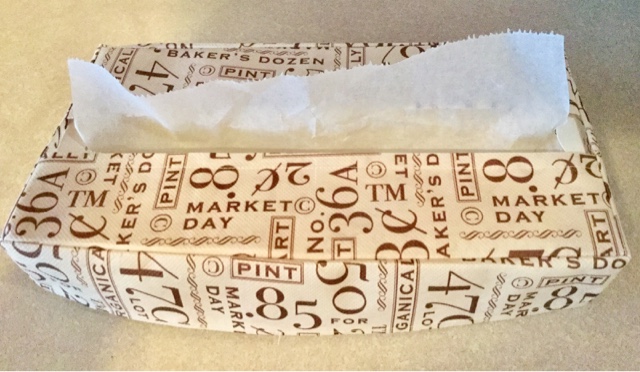 It looks a lot better covered, doesn't it? 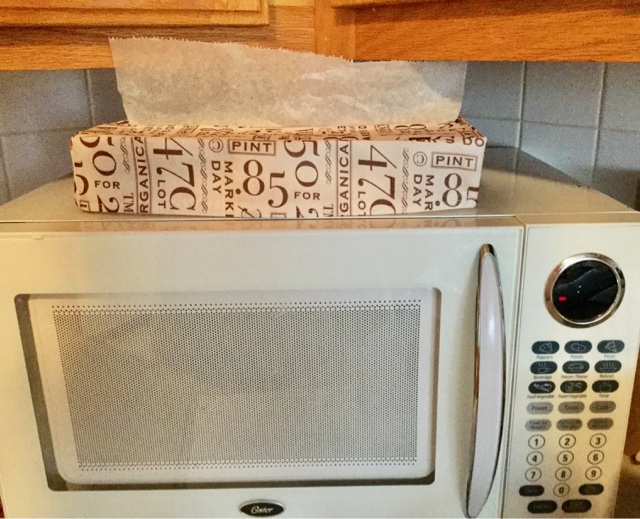 Neat cover and better than paper towels we use. Sounds like your park is nice.

Allen got a serger last night for $22 at an auction. A Singer. Know nothing about one but will have to mess with it.

Your food prep is very impressive - and so smart! I'm trying to keep a sandwich fixings container filled up, and if I pull it out, they'll use it.
I joined the 100 day sewing challenge, too. Hopefully tomorrow I can get a start with it. Thanks for posting about it!

I look to you for food prep inspiration!
I know the grands had a great time at the park.

That park is absolutely wonderful and I love that the splash pad is free! I wish the one nearest to us was because the little grandboys want to go there so badly. I am going to have to work it into the budget because I really want to take them.

What a park and I know they loved lunch. You always inspire me on getting the veggies ready for the week. It all looks so good!

The best grammy! Worms in yogurt...they will remember that when they are old and do something just like it for their grandchildren.

I was going to join you in that sewing challenge. I have a number of bed pillow cases that I want to sew (the ones from the store are so stingy in size). I use two pillows so I do four pillowcases per set. Enough fabric for 8 are all ironed. Annnnnnd that was Thursday night. :)

But I'm going fishing for a couple of days!

I'll be back to the regularly scheduled sewing Sunday night.

Your cover for the microwave covers look nice. Amazing how something so simple can make such a big impact. It's nice that your splash pad is free. All of the water features around here charge a fee. Thankfully we can can go to my parents to swim for free! I like the stackable deli tray, but for $27 I will keep using what I have. :)

Your town has a nice splash pad! Looks like fun! Your fruit trays are impressive. I'm expecting my son and his family tomorrow for a few days. Today when I do my food shopping, I am going to keep this in mind. Smart!! I love your sewing projects; your rags look nice with the zig zag trim and your cover for the paper box is great!

First off I love your blogs! I was reminiscing to myself about the Tupperware stackables, I "used" to have some, lol. Now I'll be on the lookout for more.
I always love to see your prep on your fruits and veggies. Gives me ideas.
It's only my husband and myself these days as we are both retired but we need more veggies in our diet and a little prep is a good thing.
Oh and where do you get that paper to cover things in the microwave?
Have a great week!

Having fruits and veggies cut up and ready to go is so nice when company comes--makes meals so easy to set out! We don't have any splash pads nearby and all public pools cost to use or are membership only. We have a neighbor who lets us use his pool whenever we want so when my in-laws and niece and nephew came a few weekends ago, I took them up there one afternoon and it was a good time for all!
The Federal Lunch program reminded me of when I did childcare and would take the children to the neighborhood park. They had the lunches there in the summer and would always ask if the children wanted it.
My mom had one of those Tupperware stackers when they first came out. Don't know if she still has them or not!

Hello!
I am taking notes on your food prep!
Amazing park too!!!
Have a cozy day!

A Woman that Fears the Lord said...

I love your food prep ideas! I have another round of company coming next month so I plan on using your tips!

I volunteered to hand out lunches for our town's food pantry this summer. The lunches we hand out are similar to yours. I'll tell you, I was blown away to see how they've changed over the years. Back in the 70's when I was a young teen, I volunteered at the park and we handed out lunches back then to kids with a lunch card. Half the lunch had to be in the fridge so we scrambled when the kids came to put them together and hand them out. They were often a ham or bologna sandwich, milk, & a piece of fruit. Every so often, we'd get some cookies, but we had to glove up, and wrap them each in cellophane. Now, our food pantry gets the lunches pre-bagged, different things everyday, & everything is shelf stable! So much easier & probably safer/healthier.

Your guest food layout looks incredibly delicious! Every week, I tell myself I should do that for us over the weekend.....and I don't.
We're so busy (too much yard), we're so hot and tired, & it would be so nice to have something cool and wet all ready to eat. I usually put something in the crockpot, but I'm just not a fan of hot food on a hot day.

Aren't those splash pads fun? We have one at the Y and if I hear the giant bucket ding, I always go stand under it and get soaked when it pours out!! I would've loved that as a kid. Heck, I love it now!!

Hi LaurieS, the paper sheets are from a big restaurant supply store that is open to anyone. It's called USFoods. I think the sheets are also available at stores like Sam's

I love your food prep. It looks so delicious and is so pretty to look at. You have given me some great ideas.

You are such a terrific sewer. I love the covered deli box.