I learned to make this Mexican rice more than 30 years ago. When we were first stationed at Camp Pendleton, we made friends with another Texas family, Fred and Irene. They were Mexican and grew up near San Antonio. They were both excellent cooks and fed us often. They taught us how to make tamales, chicken tacos and this Mexican rice.

This Mexican Rice is simple and made with basic ingredients. We still cook it often and always think of Fred and Irene when we do. 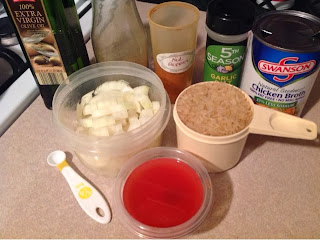 1T oil- any cooking kind is fine, I usually use canola or Olive
1 Cup rice - I use converted rice, sometimes it is Uncle Bens, I think at Sams it is called parboiled. This is long grain rice that holds its shape and does not stick together. It is not quick cooking rice
1/2 C tomato sauce -half of a small can
1 can chicken broth or 2 cups homemade broth.  (Water mixed with bouillon does not work in this recipe, the rice just doesn't cook up as good. )
1/2 of a small onion -chopped
1 t cumin
1/2 t garlic salt
A few sprinkles of red pepper and black pepper. More salt too if that is your family's taste. 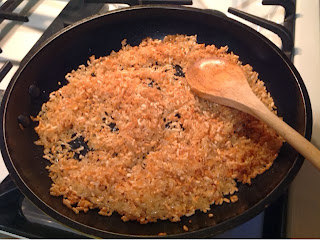 First heat a skillet over high medium. Add the oil and when the oil is hot, add the rice. Stir and stir and let the rice toast and get mostly golden brown.
Add the rest of the ingredients, the pan is hot so turn it down to about medium. The liquids will probably boil up at first, keep stirring but be careful.  Adjust your heat and stir until the rice is cooking at just a low simmer.
Cover the pan, cook for 20 minutes, or until the rice is done and the liquid is absorbed.

Irene told us to never stir the rice once it as at that simmer stage, I think it could make it sticky or something. But I confess that I have checked mine while cooking and stirred it, it still turned out fine.

If you have a big covered skillet, this recipe can be doubled. 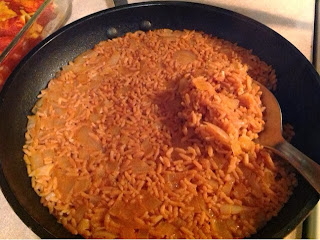 The finished rice- we had it with enchiladas this night but it is good with tacos and by itself.

My sons and son in law, who all eat out a lot more than we do, say this rice recipe is better than any Mexican restaurant rice they have ever had.

It does sound thrifty and looks tasty!

This looks pretty much like my recipe, except I add diced green bell peppers. We love it and it freezes great! Sometimes at the end I add cooked ground beef, then melt cheddar cheese over the top for a yummy main dish. I've also used brown rice instead of white - just cook it longer, maybe 40 minutes instead of 20.
We're having fajitas tomorrow night. I just might have to make some rice to go with them!

I haven't made Mexican Rice in a while. Your recipe is similar to mine. I pinned it so I could remember to come back and check the ingredients.

Thanks for sharing this recipe. I will be trying it. DH loves Mexican rice.

I also make a rice dish like this, adding browned ground beef and use chili powder instead of the spices you listed. Sometimes I get a little too much ;)

This sounds so good. I will have to try it soon!

Does sound yummy! Will have to try it!

I tried this tonight. It smelled wonderful as it was cooking and it tasted fabulous. This recipe is a keeper!

I am so glad you tried it and liked it.