February 5- waffles and a little history

Hello - no daily things to post- grandchildren have been here today and we did things but I never took a photo
My Uncle Rex passed this cookbook to me. His wife got it from her boss when she was working in a little cafe in Enid, Oklahoma in 1946.
I believe Aunt Cleta and Uncle Rex both used this book lots! 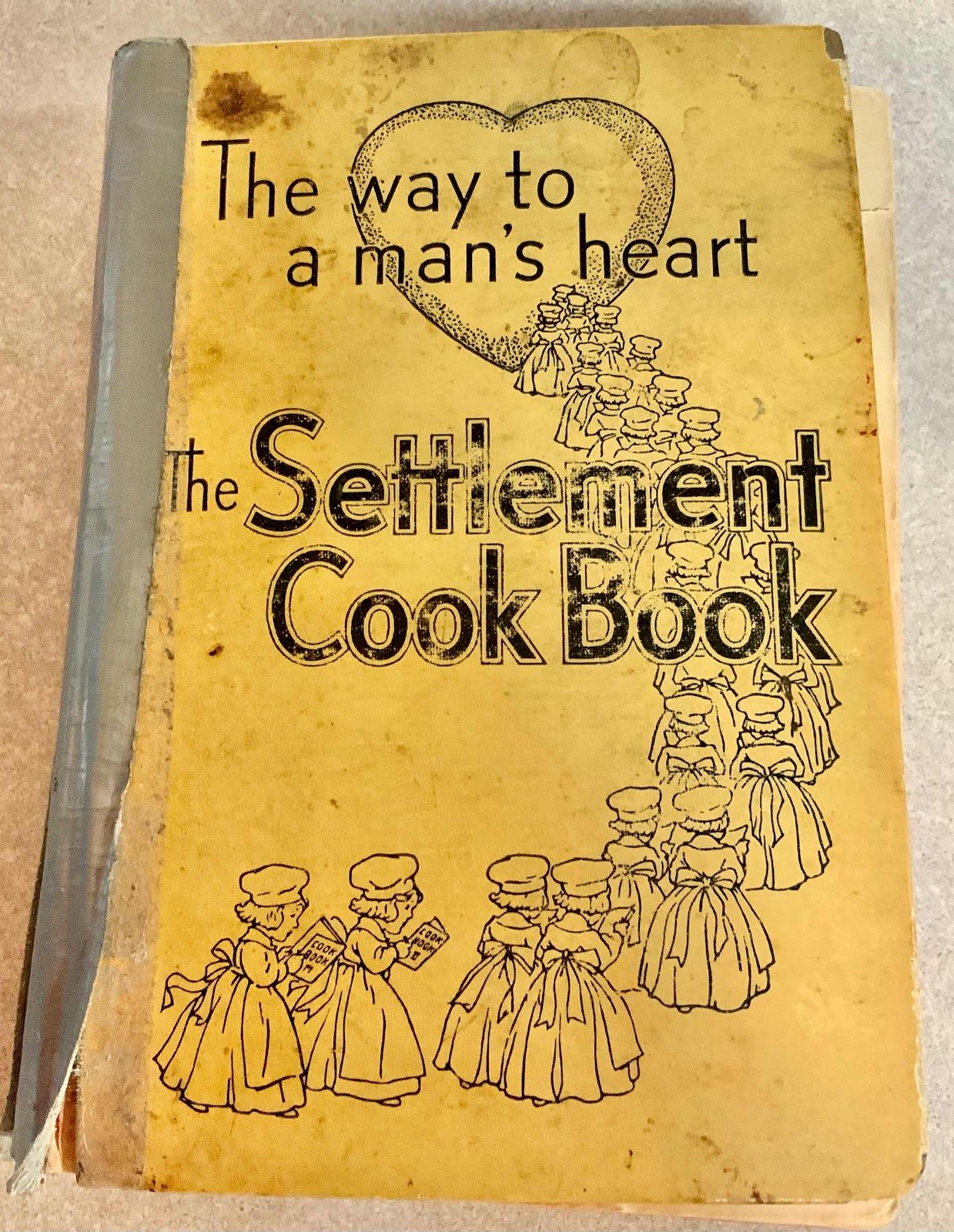 I don’t imagine any recipe books will ever be made with similar titles- it very un-politically correct, right? 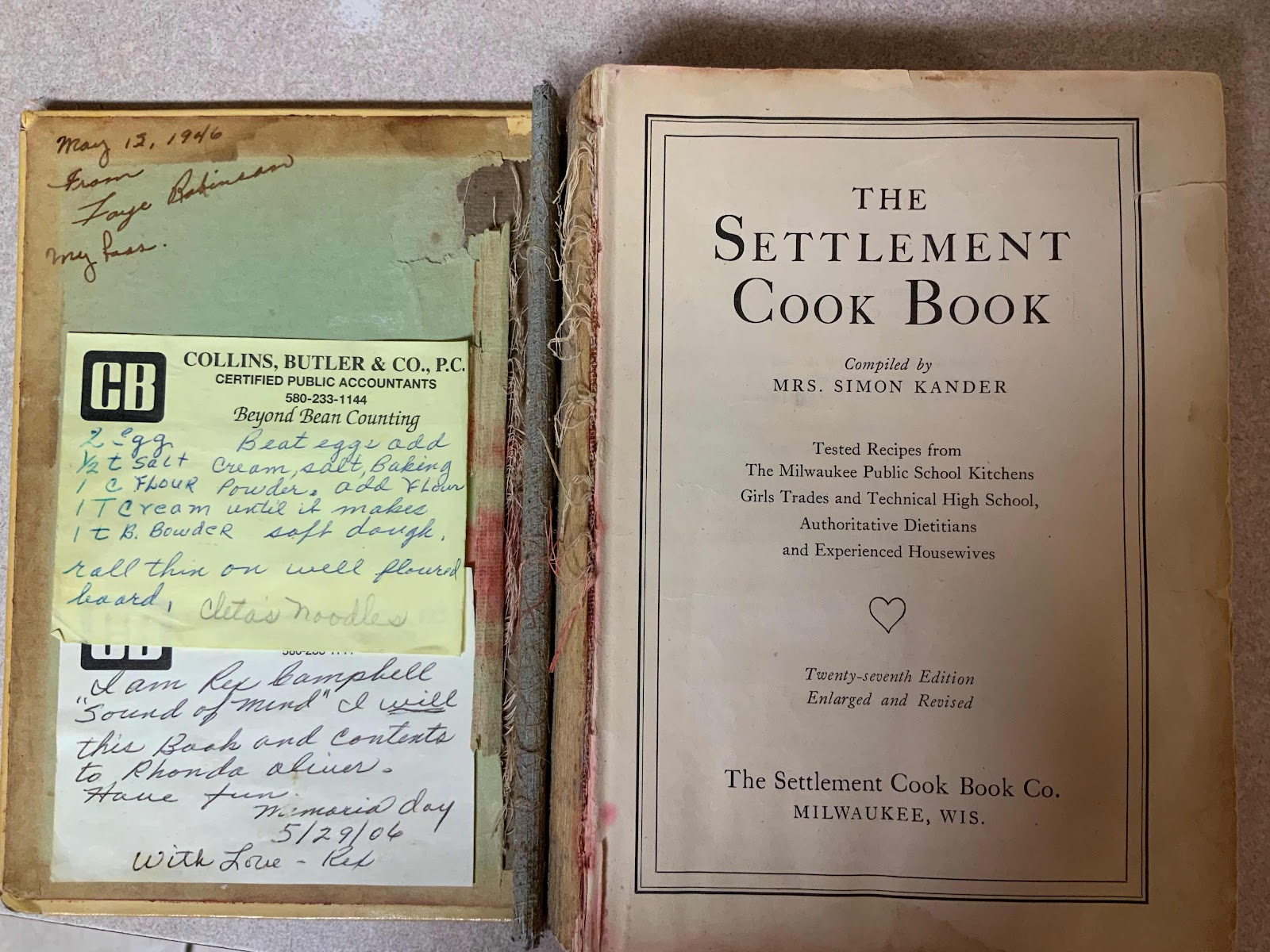 Inside is also a recipe from my Aunt Evelyn for waffles. 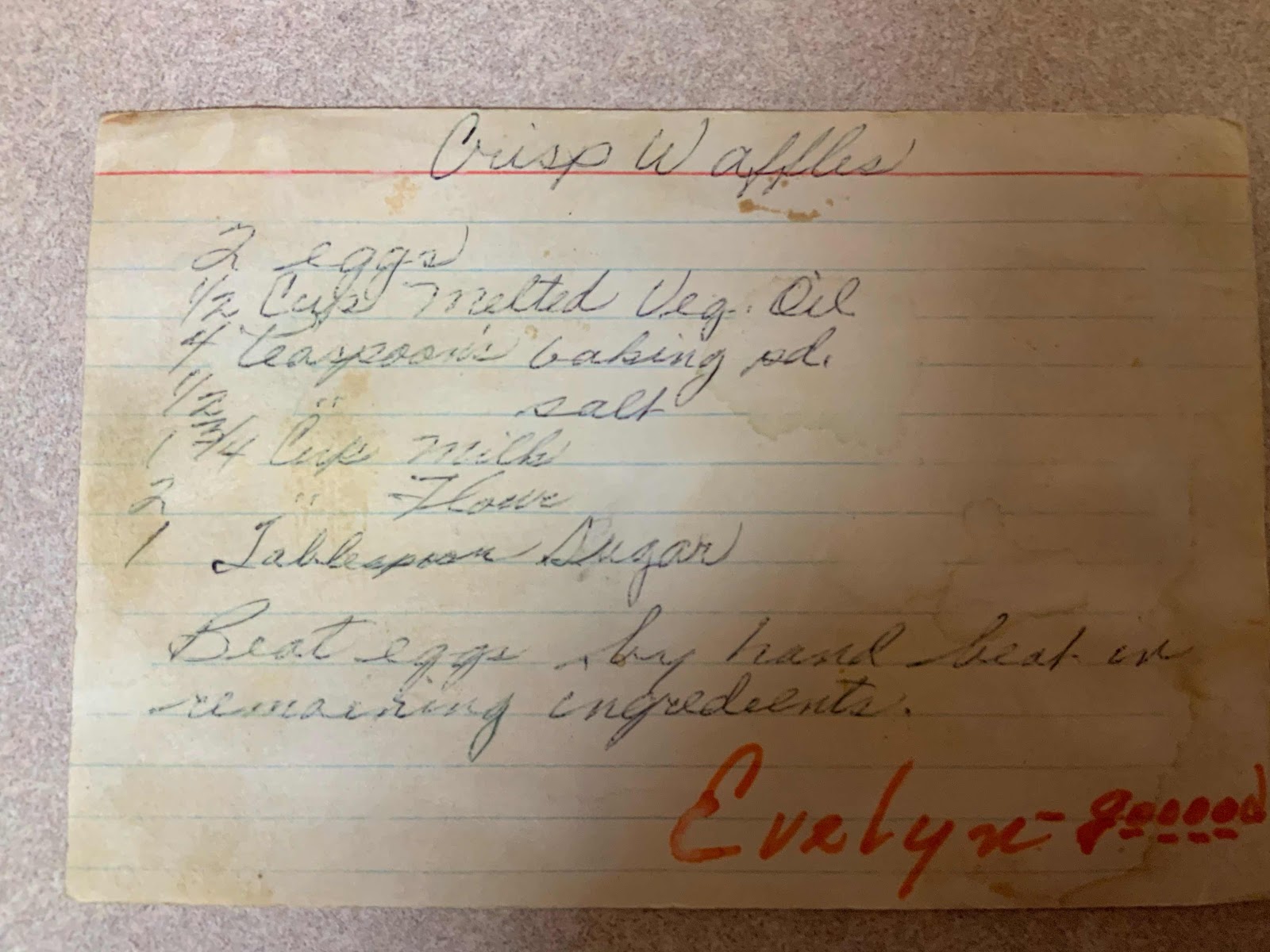 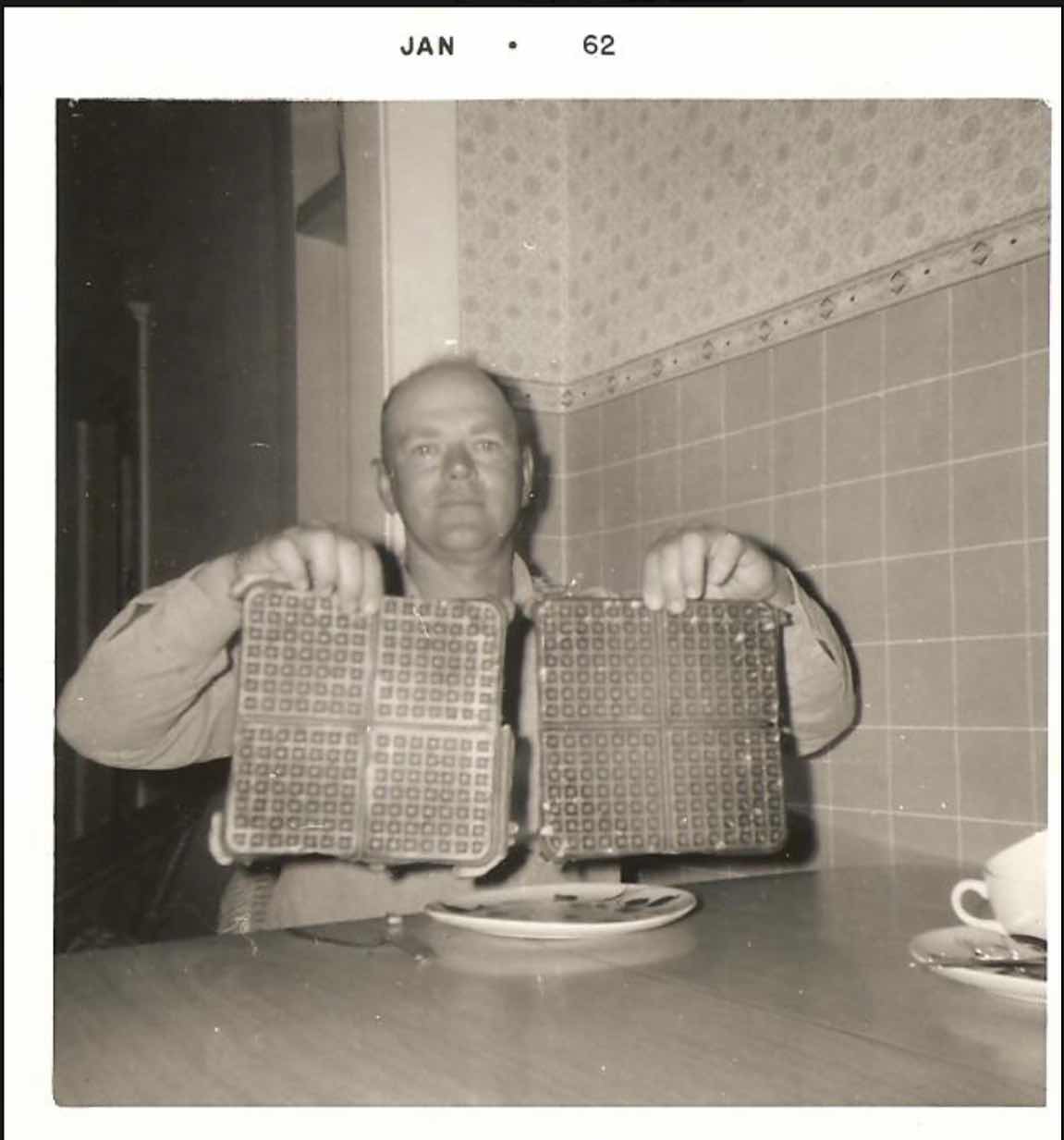 I don’t know if the waffles Uncle Rex are holding were made from Aunt Evelyn’s recipe.  I do expect Uncle Rex ate and enjoyed them though.
Isn’t that a funny photo?
Grands are here and one of them asked for waffles for breakfast tomorrow so I’ll be making Aunt Evelyn’s recipe and thinking about my very special aunts and uncle while I cook. 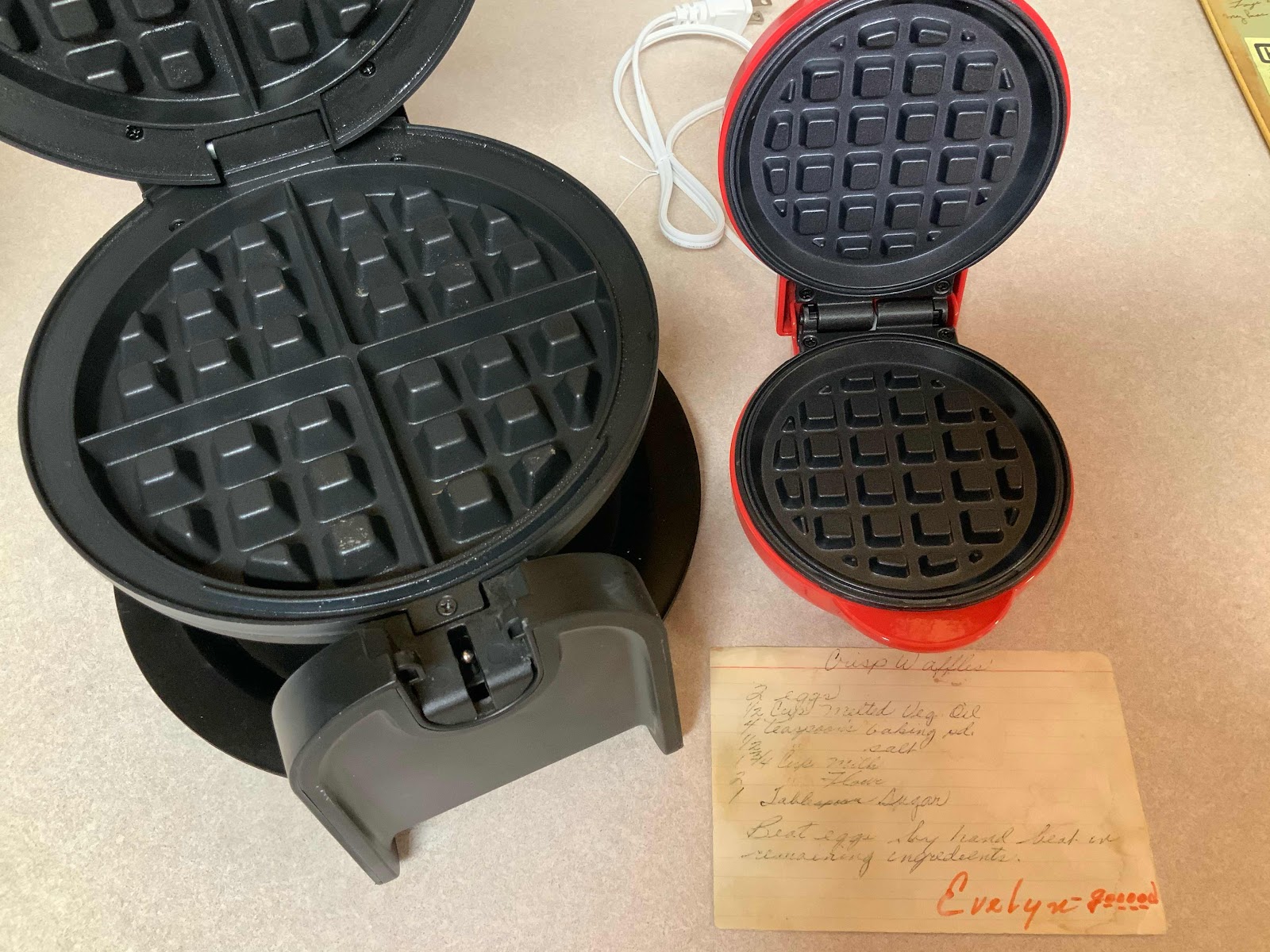 Our waffles will be a little smaller than Uncle Rex’s though.
I’ll let y’all know how they turn out
❤️Rhonda
Below are some of the waffle recipes printed in the cookbook 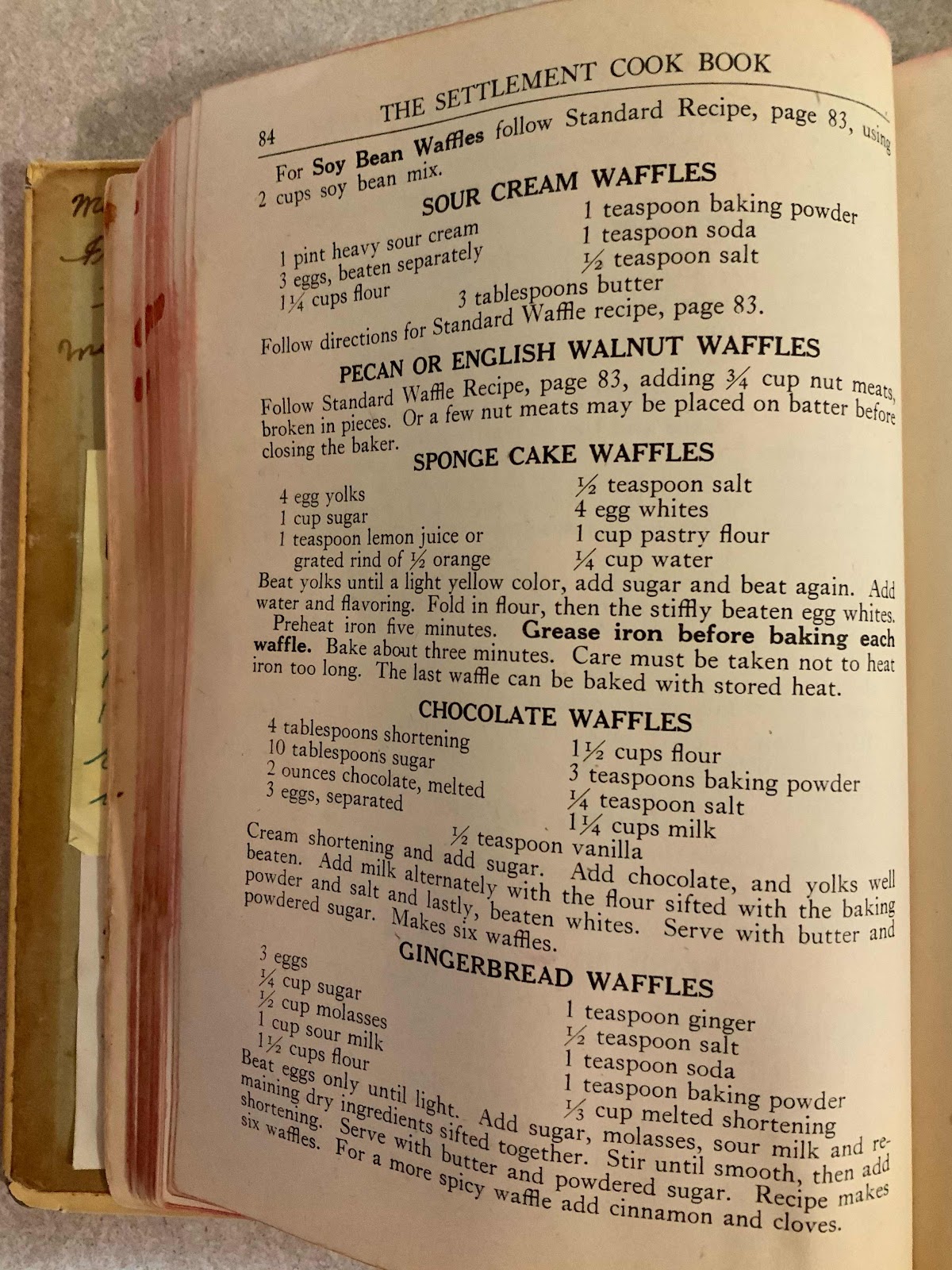 I've been thinking about getting a mini waffle iron. Do you like yours?

I love waffles. I make overnight yeasted waffles and everyone loves them.

I love cookbooks like that! So sweet. Stay well. Barb in PA

What a precious gift!

Love those old cookbooks. I have one of my Mom's from well before I was born - well used for sure.
I made cornbread waffles this week as a side for various dishes - instead of plain old corn bread!

I love old recipes and thinking about the generations of women in my family who baked from them. Waffles are my favorite breakfast food!

Good morning, what a surprise to see that cookbook this morning. My husbands mother had a copy and it is in my cabinet. I haven’t used it but will now wander through the pages and find something, cornbread does sound good ;). We don’t have a waffle maker, alas.

This cookbook has a rich history--
https://www.tastecooking.com/the-settlement-cookbook-116-years-and-40-editions-later/

Those waffles your Uncle is holding are HUGE! I'd hate to get into a fight with THAT waffle iron! lol

What a treasure with this old family cookbook! I have recipe cards from my great aunt, Brian's mother and Brian's aunt, all who have long passed away. The only recipe I've made from them is my great aunt's pork tenderloin. The other recipes have unhealthy ingredients that I won't use in my cooking/baking such as shortening. I bet your grands will love the waffles. My kids loved waffles when they were little. I had a waffle iron then, too. Me and my husband don't eat waffles, so the waffle iron is long gone (donated). Have a good weekend!

I made or should I say tried to make waffles when we were first married. I seasoned the grills, then made the batter. Placed the batter on the grill, shut it, waited the required time. Then went to open it, expecting to find lovely golden brown waffles. The waffle iron was stuck together and no matter what I did I could not get the darn thing open. Never tried to make waffles again.

Those cookbooks are priceless! I made a family cookbook for my grandmothers 90th birthday with family recipes and photos and we just did a second printing when the next generation went out on their own. That photo reminds me of my grandmother's kitchen - all the kitchens back then had tile up the wall.

I make waffles a lot. When the boys were still at home, I used to make them every Sunday before church. My recipe does not call for beaten egg whites so it goes together pretty quickly. Farmer likes them and we have Breakfast for Supper every Tuesday, so we have them at least once a month with a protein.

Great item your uncle gave you!

Those waffles are huge that he is holding!

YUM! I love waffles - the crispier the better, just regular waffles with butter and syrup. I rarely made them because I hated cleaning the waffle iron, but I finally found a waffle iron with removable plates. I splurged and bought it and now I just put them in the dishwasher after use. I always make extra and put them in the freezer - just pop them in the toaster later. Thanks for sharing that cool cookbook - you are right, not politically correct, but I love it.

Those sour cream waffles sound good. I may try that recipe.
One of the grands doesn't like waffles - I think Silas - or maybe Layla - or maybe both. I don't understand them. Lol.

I was born and raised in Enid.